We have watched the campground fill up the last week in anticipation of the Memorial Day holiday weekend. It is fun watching the different rigs come in. We also saw four brand new rental units arrive and park together. At first we thought they might be transporters as a lot of them use this campground as a staging ground. But it was obvious when we greeted them that they were from some FOREIGN country. They were Aussies from "the land down under." Would love to have talked to them but they were busy getting everything hooked up before dark and then they had to fix their dinner. They were sitting outside at 10 p.m. eating by battery light! They left fairly early in the morning. I did chat long enough to find out they had just picked up the new rigs and were headed to Orlando to DisneyWorld. Hope they have a good trip. They are in the states for three weeks.

Tab and Deanna arrived at Elkhart Campground on Thursday afternoon. They come up here once or twice a year and we always enjoy seeing them. On Friday we hit the RV surplus places and got a few things for the motorhome. Also found some things we need for MinnieMee, but we will have to take her with us next time to make sure we get the right items. On our way back to the campground we stopped at Essenhaus in Middlebury to have lunch. It was very good. We always enjoy that experience. 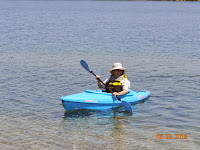 On Saturday after lunch we drove over to Goshen's newest city 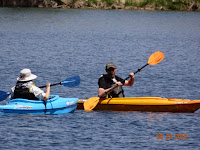 park, Fidler Pond. They have put in a walking path of 1.5 miles around the entire pond which is quite nice. All out in the open and a flat easy walk. They have also constructed a pavilion with picnic tables and there is a rental barn 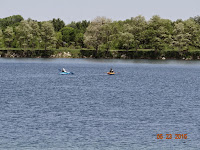 where you can rent kayaks, canoes and a paddle boat. Tab had brought two of his kayaks and he and I launched them and paddled 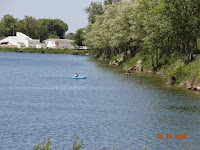 around the pond for about an hour and a half. It was great. The water, while deep, is very clear and when you get close to the bank, you can see down in the water. We saw some very large fish. The pond is supposedly 172 feet deep at the shallow end and they don't know how deep it is. Whoo hoo! 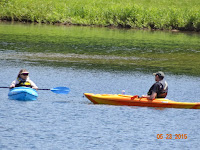 That would be deep. They do not allow swimming because of the depth and no motorized boats, which is good. It is a small pond, but adequate for kayaking, etc. We had a great time, it was a beautiful day with little wind. Terry walked the trail around and took pictures of us on the water. When we got back, we built a campfire and enjoyed visiting. Andie and Roger joined us, so we had some good conversation.

Yesterday we went over to the RV Hall of Fame museum to a gun show. I hadn't been to a gun show in probably 40 years. It was interesting and we did make some purchases. I bought hand cream from the Avon lady, some hats, a phone cord and a game. Not bad! Hahahahaha.

We haven't decided what to do today. The park is clearing out which is a little scary because we are having some pretty strong winds. Tab and Deanna are not leaving today and I'm glad they aren't going in this wind. So we may do something. We are talking about a little ride up to Lunker's in Edwardsburg. Whatever we do, it will be fun with friends!

We use service people in Elkhart for most of our motorhome needs and that is why we spend time up here getting things fixed. We have a place to stay while she's in the shop and it makes it easier for us and the dogs.

We took the motorhome in Wednesday to get the washer/dryer fixed. We thought the belt was broken. The serviceman concurred, but when he got it out of the cabinet and opened up, the belt laid there in one piece. He examined it and said it was perfectly fine, no cracks, etc. So he put it back on the machine and then started her up. That's when he found the problem. The main bearing the drum rides on is dry and squealing. Tech said it would last two months tops and probably not that long. The good news is he can fix it, the bad news is with labor, it would cost more than a new machine. And if it's fixed, I would still have a 10-year old motor and pump, etc. So the recommendation was to buy a new unit. We have an extended warranty and they will help out with a new one. We have to work out the details yet and they want a repair estimate from the w/d guy which I'm sure he will give them. It will be cheaper to go new, so that's what we are working toward. It will be next week before that happens, but mine is working for the time being.

It's working, but last night we discovered a wet spot on the carpet. As usual, Terry blamed it on the dogs, but when I tried to clean it, I knew it was a leak of some kind. Something about dabbing at a spot and it grows instantly. . . . So I threw a towel on it and we went to bed. When I got up this morning, the towel was sopping wet and we had more wet carpet. So we drug out the towels and started soaking it up. Eventually Terry found the leak. It was one of the valves going to the washer. He thought it was cracked, but he was able to get it tightened up and the leak stopped. Apparently when the w/d guys put the w/d back in the cabinet, they knocked into those valves and loosened one. Oh happy day! Just what we needed. We got the shop vac out and sucked up as much as we could. We've had a fan on it all day and it's drying out nicely.

In other news. . . I haven't been able to wear my wedding rings for three years. I had to have them made larger to wear for Brandon and Megan's wedding, but my joints have really gotten gnarly and the ring finger joint in particular, I manage to injure periodically. I had researched various systems for making rings slip over joints and I knew there was a custom jeweler here in town that does them. So last week Terry and I went to Images Jewelers in Elkhart and talked with them. It is expensive, that's for sure. But I have a beautiful wedding set that means a lot to me. It's unusual and I want to wear it. I figured with my finger joints all enlarging I will probably not get to wear other rings, so I at least wanted to be able to fix my wedding rings so I could continue to wear them. They fitted my ring with a Superfit shank. It's actually an entire ring on the inside of my ring. The last time I had it repaired, the jeweler did a bad job of it and I showed this jeweler what had been done wrong. They were really just going to put the new shank on it, but when I got it back, they had fixed the problems and my ring once again looks like it should. The Superfit shank has a finely machined hinge in it. When it is closed, you cannot even see the hinge. The clasp to open it requires a stylus that you press into an indentation. It's quite unique. So, yes it was expensive, but I will be able to wear my wedding rings now no matter what my joints do and it opens up to go around my finger, then clasps shut. 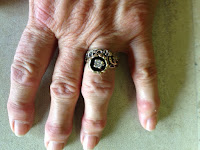 Terry told me that was my birthday present, anniversary present, 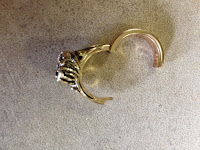 Christmas present and Valentine's present (next year). LOL That's okay. I love getting to wear my rings again.

Goshen for the time being. . .

We landed in Goshen last week and on Monday took Phaeton Place over to Hill's Truck Service in South Bend. She has a fuel leak and we want it fixed. We get a good dose of raw diesel fumes inside the coach, most prevalent when we stop for the night. We have been opening the basement bay doors and airing it out when we get to camp.

Yesterday, one week later, we picked her up and hope they have the leak fixed. It wasn't where we thought it should be, but they did find a leak. When we first took it there, they got to the oil change and noticed a leak in the rear differential, so they set to work tracking that down. We actually have had that leak for several years and have had it "fixed" a couple times, including once at this same shop. All to no avail, as it has continued to leak. This time they ordered parts, a couple seals, etc. They also found a loose belt at the water pump and I think they had to tighten up the water pump itself. Good that they found that, for sure. When we called a couple days later, Terry reminded them of the fuel leak and alas, they thought the rear differential leak was what we were talking about. Ugh, no! So they set to work tracking down the fuel leak. They finally dropped the fuel tank (not a cheap process) and found a leak at the supply line to the generator. Again, not where we thought it would be since we get fumes 35 feet back in the bedroom. But they thought this leak could cause the fumes where we complained of them. We shall see. They have been great in fixing things for us before, so we are hoping they have her fixed this time. It will take some time to find out, as we are staying at the campground in Elkhart through the end of the month. It won't be till later when we take off for a bit.

Now comes the task of putting everything back in the basement. We had removed everything from there including the two slide trays (man are they heavy) so they could get to the fuel lines raceway, which we don't think they even checked! Ugh. Today has turned very cold and windy, so not sure we will be doing that job today. We still need to get the washer/dryer fixed before we head to the camp. We took MinnieMee over there yesterday rather than back to storage because it was raining and Terry needs to dump the tanks before going to storage. Also, hate to take her in the building when she is dripping wet.

On Saturday we took MinnieMee down to Nita's woods and camped overnight. We took the girls with us. We enjoyed visiting with family including Mom and Dad. There was a cookout Saturday night and we all pitched in and it was delicious. Then on Sunday we all drove down to Wabash to the Honeywell Center for Mother's Day brunch. It was wonderful as usual. We have been going down there for several years now and it is always good. I think I ate my weight in prime rib. It was delicious and cooked to perfection. The girls enjoyed seeing Mom and Dad again. They hadn't seen them since we left Texas, and Grandma didn't disappoint them. . . she had treats!

We have a couple rallies planned for this summer and I always enjoy those. One is coming up the end of May.