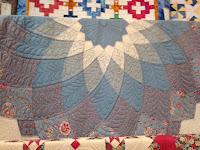 We arrived back in northern Indiana to cooler temperatures for just 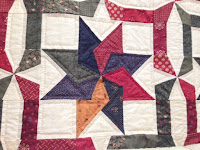 about a week, then it turned hot, hot, hot. But we did manage to get a stint in at Shipshewana. Amish countr 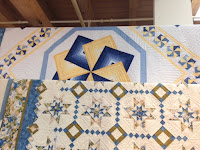 y is my favorite place to be. Everyone is so laid back, a much slower pace is found and the countryside is quiet. We arrived on a Sunday and left on Wednesday. I like to visit the shops in town and I found some beautiful quilts. I took pictures for my friends who are in to quilting.

Back at Elkhart Campground, there was a rally going on. There were so many rigs for the rally that we waited an extra week to get a spot. We could have gotten in earlier, but I wanted a 50 Amp spot since the weather was turning hot again. Can't seem to escape it. 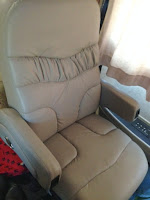 We have been working on various projects, mainly getting stuff loaded back 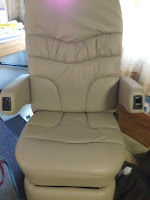 into the motorhome from the many repairs we were plagued with this summer. We also took our captain's chairs out and took them over to Shipshewana to have them recovered. That was about half the cost of buying new and we were assured the frames were still good, just bad foam. We got them back yesterday and are very pleased with them. I did go with a bit darker color that will look nicer a lot longer, I think.

We have been working at selling another duplex and we closed on it September 14. Whew. Four of the five have been sold. The only thing left is the condo and we are starting to work on it next year. Getting stuff cleared out of it, repainted inside, some new windows. . . and then who knows? We know we don't want to live in it. Terry absolutely cannot tolerate cold weather and since he has done so well healthwise in the last ten years, we know it's because he isn't exposed to cold temperatures. So we plan to keep it that way. With having sold all but one, we hope to be able to travel more in the summers. 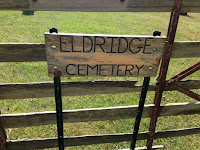 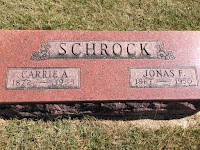 decided to find the "elusive" Eldridge Cemetery where many of my ancestors are buried. We had tried to find it when Jocelyn was here, but had to give up. We had been by it once years ago. It is on a county road, but one that dead ends and then actually starts up again. 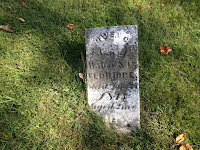 So you have to get on 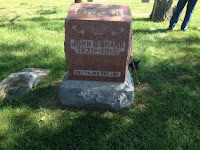 the right portion of that road which is only maybe a mile long. It is a quaint little cemetery that seems to be well kept. . .by whom I don't know. It doesn't appear to be used anymore. I took some pictures for the genealogy buffs in the family. The Schrock grave is my paternal great grandparents. I actually remember Carrie whom we called "Big Gramma." The one is not a relative, to my knowledge, but is the grave of a veteran of the Civil War.

Progress continues for our launch date of September 24. We start heading south and plan to visit each of the kids before finally landing in Texas.