We continue with the sale of the house. It is all but empty and the closing is set for September 17. Whoo hoo. . . so what have we been doing?

Getting Terry in shape was priority #1. The Entresto tried to kill him. . . shut down his kidneys and he started filling with fluid. When his tissues started leaking fluid, we knew it was bad. But going off the Entresto was bad as well, because you must be off it for three days before going back on his old meds. But he made it through that. He still wasn't losing the 30+ pounds he gained in the last month, so more adjustments were made and the water started leaving. It took over a month to get it gone, but he is now doing better than he has in two years. Now we think the entire problem was that he was retaining more fluid than he should have been and need a little help with that. He continues to do well and has been a bigger help in the process of selling the house.

We had visits from all the kids and their families in June/July. Jocelyn came first and stayed almost two weeks. We babysat for the kids while the adults took in some activities down in Fort Wayne. That was fun for us and we enjoyed the time with the kiddos.

Brandon's came over the fourth of July. They were here for a shorter time and visited some friends along the way, but we got to spend some quality time with them as well. Love seeing the kids and grandkids.

We sprung for a new jack system on Phaeton Place.  That was pricey, but leveling is not overrated on these big rigs. We went with the "Big Foot" system by Quadra Manufacturing. They are in White Pigeon, Michigan, not far away and we were able to boondock there the night before. They got the new system installed and we were trained on it afterwards. It seems to do exactly what we want it to do. It is different than the other system which was all done with the engine running. This system requires only 12-volt, so the engine is off when it works. Bit of a learning curve.

After checking in with some doctors late in the month, we hit the road in MinnieMee and the trailer to take a load of household goods to Jocelyn. There were items she wanted from the house, so we were happy to oblige. The trip went off without a hitch and we first arrived to her storage unit to off load some stuff, then on to her house to leave the rest of the treasures. We did stay an extra day to visit and to haul the box springs she had bought. Then we headed back to Elkhart. Again, a good trip and MinnieMee seemed to enjoy the outing. We really love that little motorhome.

Since then we have continued our garage sales all summer. I think it has been 7-8 weekends, but we got rid of a lot of stuff. We made around $2000 on stuff we have sold. We rented a 10x40 storage locker in Nappanee which will hold the stuff we are keeping and Li'l Red. We have taken one load and the trailer with another load. Sad to say we couldn't get it all in one load. Once we decide where it will all go, we will decide how to get it there. Our friends Tab and Deanna came last weekend and he used his trailer skills to get the trailer into the storage locker. It was a very tight fit and they never make those lanes wide enough to back straight in. Getting it out should be easier, but that will be next year. We still have some stuff to take over in the car, but it is just one load at the most. We want to do some rearranging of stuff and make sure nothing is setting on the concrete where it will draw moisture. 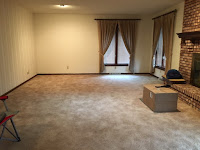 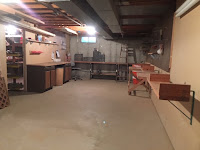 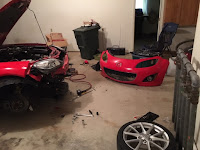 Everything at the house is now out of the cupboards, etc., and in 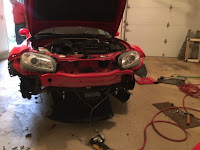 bags marked for distribution. Today we are taking a load to storage. Monday and Tuesday Terry tore the front end off the Miata to further complete the work he started on the baseplate. He wants to tow it behind 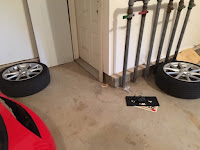 MinnieMee. I am so thankful that he is feeling well enough to do that. He is really doing so much better. I know those docs who told him last year he needed a transplant would not believe how he is doing. He's really back to where he was before he got sick two years ago. . . actually I think he is better.

So, we continue to finish up here in Goshen. We will no longer be landlords. Yay! No more headaches there. Not sure what our schedule for this winter is. Virginia for sure to see the kids; Florida for sure to see the kids; after that? Who knows. Probably will end up in Texas at some point to check on the property there. With Mom no longer there, it's not the same going there.