It's been a trying month since we made the offer on the house. The owners had decided prior to selling that they would put a new roof on it and that was a great surprise to us. We had questioned the roof and told it would "pass" inspection, but we were going to have to look at it very closely.

We had our inspection done, which had to be delayed due to the roofers being lazy. Also, the roofers took the lightning rods off the house and didn't put them back on, so Terry was on that. Eventually they put them back up. The inspection yielded no surprises. The 4-T HVAC system is in great shape at only 3 years old is more than adequate to do the job. Roof is now new. Plumbing is all in good shape. We have 200 amp service at the lot which is good as well. Everything was in good shape.

The owners kind of lagged behind in getting it emptied out of their personal stuff and eventually hinted they would like some extra days after the closing. Our realtor reminded them they had signed a contract, so that was that. We still had stuff we had to clean out, but not nearly as much as we would have had.

We closed on December 2 and have been working since then. We moved the motorhome over the next day, the 3rd. She fits nicely under the canopy and once in, we can get three slides out, which is fine. This allows us access to everything inside.

In addition to working on the house itself, we take breaks and shop for items we need. I bought new bedding for the bedrooms and found lamps that go perfectly with the rooms. The large bathroom in the master had a handicap bench in the shower which was dirty, moldy and left stains on the floor. Terry finally got around to removing it yesterday and I started scrubbing the shower. Vinegar cleaned it up nicely and now the floor is sparkling white even where the discoloration was around the legs of the bench. It is a very large shower, so if we need a seat in there we can always add one.

We bought some new furniture for the "veranda room" but it won't be delivered for another week. The veranda room is like a Florida Room, but it was actually built as part of the house. It has windows all the way around.

We had multiple light switches in rooms that didn't seem to work. We thought they went to outlets, but had problems locating them. I had emailed the manufacturer, Jacobsen, and the gal sent me a floor plan which showed where all those light switches were ! Ta Da! So now I have lamps on those outlets so everything is working.

It's all been a work in progress, but fun at the same time. We have lots to do here and we plan on moving on to Texas after the first of the year, so we need to make a list!

I am posting some pictures but still have much to do. 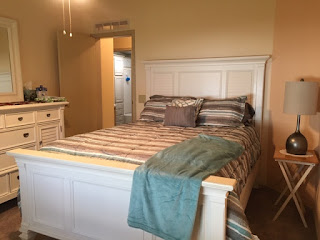 This first picture is the spare bedroom and the one below is the master. 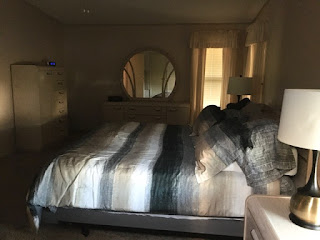 It's been a lot of fun getting this set up the way we want. We still have a ways to go, but it's coming around.

Is this in Mount Olive Shores North? If so, we have friends there.

Hey, Bill! Good to hear from you. Our new place is in Mount Olive Shores, not Mount Olive Shores north. We did look there, but they would not allow us to keep both motorhomes on the property and you always must have a Class A even if you have an enclosed garage to keep it in. I personally think that rule is just plain silly. We must have a Class A for the first year of ownership, then anything goes. We have talked about trading both of ours in on a Super C and we can do that here in our park. We like that option better. Mount Olive Shores North is just down the road from us. When I get ready to have a "real" home though, I probably won't want to have to have an RV at all. We are still traveling, just finding a place where we can sit a spell in the winter.