When Terry died, I prayed for some sign that he was okay. I remember all the tales of signs when my sister died and stories others have of when their loved ones passed on. A common theme among all those stories is the cardinal. A beautiful red bird, my favorite of all, and one that seems to show up during these times.

As the days after his death wore on, I resumed my normal activities in the motorhome, sitting in my chair and spending time on my computer. It was usually dark when I would arrive back at the camp from my daughter's house and as I sat in my chair I would hear "clunks" and "thunks" from outside somewhere. Sounds like that are very common in a campground and I was in relative close proximity to other campers and thought nothing of it. It was dark outside and I couldn't see anything outside anyway. 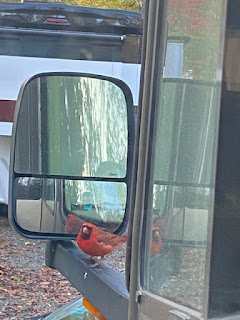 One morning as I was sitting and enjoying   coffee I heard the noise again, as I had several different times. On impulse, I put my blind up and looked out the window next to me. To my surprise, there was a cardinal staring right back at me! He was on the sideview mirror at the front of the motorhome, not but a few feet away from me! The thunking noise I had been hearing for the past couple days was his pecking at the mirror! And this noise all started after I had asked for a sign! Imagine that! It was several days before I would leave for our home in Florida, and that cardinal stayed with me until I left, sometimes perching briefly on my window frame. I eventually started putting out some sunflower seeds for him and he eagerly ate them up! daughter's mother-in-law, Sharon, spent a night with me and she even got to see the cardinal! 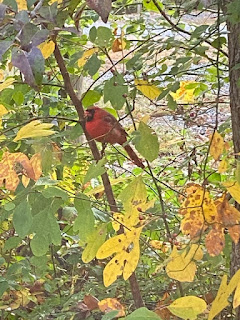 Later she sent me a lovely plaque to hang in my house. My son's mother-in-law also gifted me a pillow she had made. 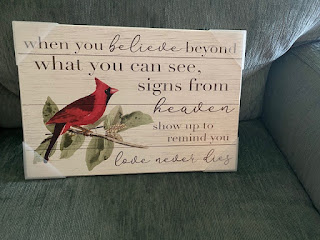 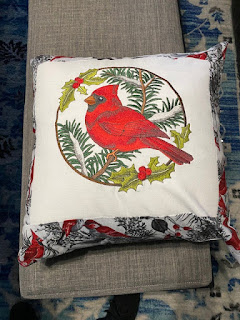