It's been a while, but we haven't been doing much of anything interesting. Just trying to get some doctor and dentist visits out of the way.

I was a bit bummed out by our family doctor who decided I had some mysterious ailment relating to my "dry eyes and dry mouth." He insisted I see a rheumatologist and an ophthalmologist. I don't mind seeking second opinions, but with a month before departure on the Great Alaskan Adventure, it wasn't exactly on my calendar. He accused me of "recreation over health." I guess what really aggravated me was that whenever I suggested testing for something, he blows me off. Then out of the blue he comes up with this strange diagnosis when I was certain (and still am) it was the result of taking an OTC acid reflux pill on a daily basis, which is when my symptoms developed.

But I did see a rheumatologist Friday and he agreed with me. He did order a lot of bloodwork, so if anything strange pops up we will know. But most likely the problem is related to the pill and the fact that those symptoms occur as a natural part of the aging process. He did also indicate that my arthritis is more likely the early early stages of psoriatic arthritis, since I have been plagued by psoriasis for 53 years. He talked about some of those new meds, the biologics, which I will totally resist taking. We talked about my love of a cortisone shot twice a year and at that "infreqency" he agreed I was likely to suffer no side effects from that medication. And because of that would consider it much safer than the biologics. At least for now. Whoo hoo. He injected my aching bursitis plagued hip, too! So I'm feeling much better than I did when my doctor heaped all that on me.

Tuesday I see the opthamologist, but I'm not worried about that. Never a bad thing to have the eyes checked out.

We have found a new dentist and we really like him. Thanks to sister Nita who recommended him to us. We have two trips back to see him and get all our work done before leaving for Alaska, but we will be fixed up then and shouldn't have any worries about having problems on our trip.

Last week Tab and Deanna, fellow Alaska travelers called and wanted to get together, so we are camping at the Elkhart County Fairgrounds here in Goshen. They brought their little motorhome and we could have brought MinnieMee since we just got her out of storage. But we did need to dump the tanks on Phaeton Place and decided this would be a better place to do that since we have full hookups. Terry will be able to dump and rinse the tanks and get things really clean before putting her in storage for the summer. And I had a few cupboards I wanted to clean out, foodstuffs, etc. Easier to do here with the slides out and on level ground. So we have a working morning ahead of us. And. . . wouldn't you know. . . it's raining! But no matter. . . not raining hard, so we will "get 'er dun. . . "

Yesterday we spent running around to the rv surplus places for a few spare parts Tab and Terry wanted. We actually found everything they wanted,

then celebrated by having lunch at Essenhaus in Middlebury. Afterwards we came back to the camp and built a fire. Eventually we put on some hobo stew and cooked it over the fire.

The real treat last night was that here at the fairgrounds there was a "training session" for teaching people how to safely set off fireworks. Apparently it was for people who put on the big professional type displays. So we got to see fireworks! Pretty cool. I got my new camera out and took some shots. I got some pretty impressive shots, but afterwards doing the editing, I found I had a "FIREWORKS" 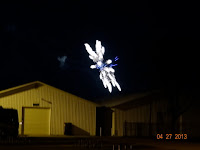 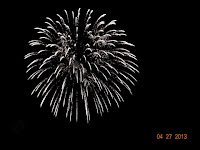 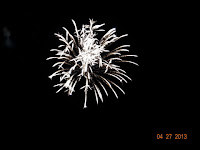 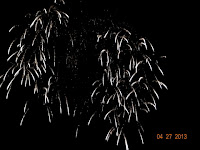 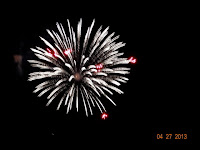 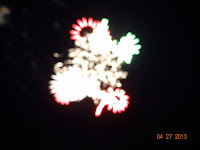 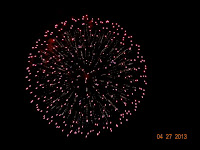 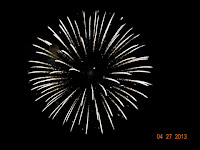 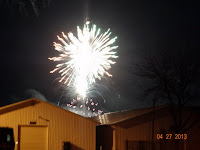 shot setting on my camera. Whooda thunk? Guess I should have been learning more about my camera, eh? Maybe practice a bit more before trying to shoot wildlife on the trip. LOL

Today we will return to the condo, park Phaeton Place beside MinnieMee to make the final transfer of stuff. Then when it stops raining, we will wash PP and take her over to storage. We have three weeks to go. We have moved our departure date to May 20, provided the satellite phone has arrived by that time.

Our time before "The Great Alaskan Adventure" is winding down. On the way home from Virginia, we stopped and spent two nights with our fellow Alaska travelers, Tab and Deanna. We talked about a few of the things that we wanted to finalize, like the satellite phone, etc. We made an adjustment to the trip because Terry is limited to altitudes due to his heart condition, so we made a bit of a change there. Surprisingly, he thought Alaska was going to be a problem with elevations, but it actually is not. It has some tall mountains, but we don't plan to scale them. . . only admire from a distance. He can't do tram rides up the sides of mountains, but he doesn't like those anyway. LOL We got back to the apartments in Goshen and are checking things out here in preparation for our trip. The service truck needs service and we have some things to work on for MinnieMee, our little Alaska rig. She is still in storage. We will leave here on Sunday and head for central Indiana for our routine doctor appointments, then once back here, we unload Phaeton Place, wash her, dump the tanks and get her ready for summer storage. We will bring MinnieMee over and complete the swap of items, then put Phaeton Place into storage. We leave May 22, give or take a day. Tab and Deanna are coming over a few days early in order to see his niece. We have a retirement party in Muncie to attend on May 18 and don't want to miss that, but afterwards will head back up here.

And now to catch you up on our activities for the past two weeks. . . We were in Charlottesville when we learned Terry's cousin Floyd had passed away. Floyd was only 51, but had numerous health issues for the last several years. He had been hospitalized since around Thanksgiving and he was not able to recover from various problems. Terry and I really wanted to come back to Indiana/Michigan in order to pay our respects and meet with the family. When Terry and his parents first moved to Indiana from Mississippi, this part of the family (Terry's dad's brother, etc.) was among the closest family he had and he spent much of his youth gathering with Uncle Bill and his family. We weren't ready to leave our daughter and family in Charlottesville, so we extended our stay there and climbed into the truck at 6:30 on a Friday morning and drove to Goshen, Indiana, arriving about 12 hours later. The next day we spent visiting with the family and attending the services for Floyd. He had been so very sick and while it's always hard to say goodbye, it was the best thing for Floyd. He is now free of pain and illness that had racked his body for so long.

After the funeral, we had dinner with the family at the church and came back to the house. We changed clothes and at 5:45 p.m. we headed back for Charlottesville. We drove to Marysville, Ohio, and stopped for the night. We started out the next morning about 7:45 and drove to Charlottesville, arriving in the afternoon. We did spend some time that evening with the kids, but we were pretty tired, so called it an early evening.

We never get tired of the grandkids. Ronan is growing up. Almost six now and

he is very smart and articulate. He has a large vocabulary and listens well.

I went to his gymnastics lesson with him, Tom and Aenea, and he listened intently to the "coach" and

did exactly what she told him. Aenea enjoyed watching the "big" kids do their routines.

The last night we were there, Ronan and I played Chutes and Ladders and Candyland. After the first couple games of Candyland, he said it was his "turn" to shuffle the cards. It was easy to see that as he had the cards hidden from

my view he was stacking the deck. LOL What a hoot. I told Tom and Tom asked him about it. Ronan assured him he was just mixing them up, but when he was finished, he presented me with my "own" deck to pick from while he had his own deck. Hahahaha. That was the quickest game I ever played. He went straight to the top of the board while I hung out at the bottom. It was too funny.

t was cold most of the time we were there, so we hung out inside. After we

the kids have had some warm days and they like to hike in the mountains. So I am including some pictures they took of their park time and their hiking adventures. Enjoy!