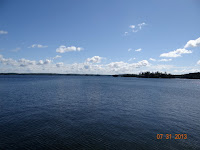 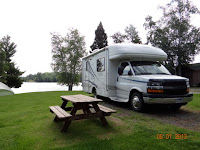 We just wrapped up two wonderful days. . . or I should say. . .a day and a half at Burgess Island, Sioux Narrows, Ontario. Burgess Island was bought in the 60's by the Burgess family. Their son, Dave, taught with me for over 20 years at New Castle. Dave has been spending summers there ever since I have known him and many fellow teachers have visited during that time. We never have, but thought that this year might be the right time. We are on our way back from Alaska and came across Canada on the Trans-Canada highway, so it was easy to drop down from Winnepeg and visit with Dave and Mark.


When we arrived at Laughing Waters Campground, we were given a prime site that had a view of the island. The campground owners are great friends of Dave and Mark and I think that had something to do with our site. We called them when we got in and they, along with Baxter the Scottish Terrier, came over in their boat. Before going straight back to their place, they took us around the island and pointed out different landmarks and where other "Hoosiers" lived during the summer. 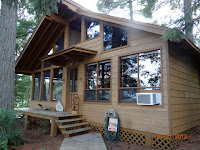 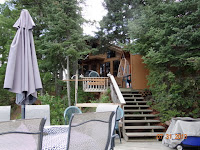 I knew their place would be "special." It is a cabin on an island with no services, but they have added solar for lights, a wood-burning stove, candles, hot water and a pressurized water 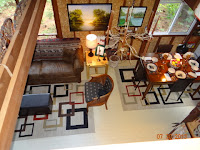 system. They even have a composting toilet! It's as comfortable as you can get. . . not much different than living in an RV actually. The island is a really 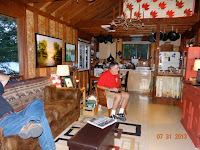 special place and it is so peaceful. There is a breeze much of the time and the sounds of the water lapping on the shore are priceless. Every room has a view of the water and the cabin is built up a hill, with a boardwalk and steps leading to it, so the views are beautiful.

Dave and Mark fixed us dinner. . . walleye, potatoes on the grill, and salad and we had some 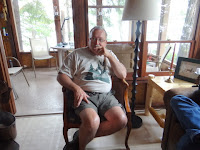 After dinner we all got in the boat and went for another ride, hoping 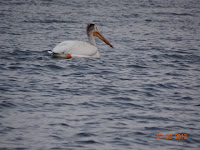 to catch the sunset. We did, but there were some clouds, so not quite as bright as we had hoped. We did see pelicans though. ???? Pelicans in fresh water? Not sure how that works, but they do have them up there.

On Wednesday, they picked us up early and took us to breakfast. Since they had some errands to run, we went to a dock where they keep their car and parked the boat. Then we all (including Baxter) hopped in the car and took off. We had a lovely breakfast, then visited some gift shops in Sioux Narrows as well as the Visitor's Center. They took us to a lodge which is beautiful; but more importantly, Dave narrates earlier history of the area. He has been involved in this area for 40 some years and can tell a lot about the various families that live here or have lived here. It is quite interesting.

We returned to the boat and back to the cabin where I shared my Alaska pictures with them. I hope to 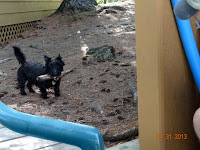 get them all put on a CD and give them to Dave so he can go through them all at his leisure. I don't 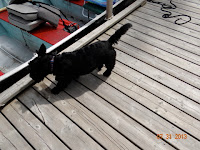 know how many I have but I'm sure it's thousands. Later in the afternoon Dave and Mark left for an appointment and I entertained Baxter while Terry napped. I mostly sat out on the dock and enjoyed the solitude. Like the desert, I find sitting on the dock with the breeze blowing and the water lapping to be spiritual . . . until Baxter starts chasing the waves or squirrels. He does both with GREAT gusto as only a Scottie can.

Later when the guys returned, they fixed supper (I tell you I'm getting spoiled) and afterwards we played a couple rousing games of "Fruit Salad." Pretty fun game.

Unfortunately our time there had come to an end and we bid our farewells to Dave and Baxter and Mark took us back to camp in the boat. It was truly a special time and the guys appreciated our taking time to visit them. 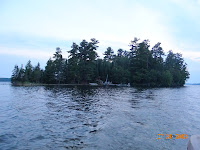 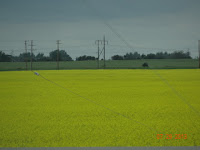 The canola fields seem endless up here and right now, they are a bright yellow color. Really pretty. The farm grounds are beautiful as well and it is lovely countryside to drive through. 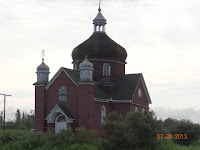 We passed through the small village of Insinger and stopped to take a couple pictures of this church. It apparently is no longer used, but it was quite interesting. I wonder what it looked like inside. It is the Ukranian/Greek Orthodox Church of the Holy Ghost. 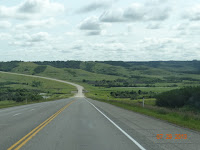 We continued on today to Winnepeg. Working our way to Sioux Narrows, Ontario.