I must confess. . . I forgot the blog! Oops! Grandchildren have a way of making you forget the doldrums of everyday life. I must confess, mine were happy when they were here and always anxious to see us. It warms your heart when the kids call for you when you arrive and throw their arms around you. I can't get enough of it.

Our dogs got along great with them. Duchess is not a real social animal but she didn't shy away from the attention. Butterscotch was often in the middle of whatever Aenea was doing as Aenea loved petting her and talking to her. There were times, though, when the dogs would wander off and settle in behind the recliner or at the back door, etc. The noise level was obviously higher and at times I think they just wanted a quiet place to rest. They were always ready to head to the motorhome at day's end.

On Saturday the 19th, we found ourselves in Indianapolis babysitting from about 5:30 on while Jocelyn and Tom attended her 20th high school reunion. We attend all our reunions and really enjoy touching base with people who were an important part of our lives. They were able to enjoy the evening without worrying about the kids. We fed them, then took them to the pool, then back to the room where we read, watched movies, and Ronan played on the IPad. When Tom arrived back around 11 p.m., Ronan was asleep in bed and Aenea was doing her best to stay awake. At least she is not fussy when she is sleepy. It was a great time for all of us. The kids stayed on at the house until Wednesday when they headed back to Virginia. They camped along the way.

We continue to work at the apartments, getting all the shrubs trimmed. That is a big job, even though we only do 4 of the 5 houses. The main house itself has bushes completely surrounding it, so that takes a couple days even with both of us working. But that is finished. Not sure we will have to do it again. With the really cold winter, they didn't grow a great deal.

Terry has been working at installing a new TV in the front of the motorhome. He did a great job, as usual, and it is now finished. We now have HD TV in the motorhome and it is a big difference over the picture we had before. They TV that was in the box in front weighed about 60 pounds, so Terry is glad to have that out of the front and replaced with a thin lightweight model.

We have had quite a bit of service work done on the motorhome this summer but hopefully that will keep us safely rolling on the road. We had the 100,000 service done. . . hard to believe we have traveled that much, but that is nine years on the road, with 4 month stops in the winter in Texas. We also had an exhaust leak repaired. We noticed a couple flat spots on the front tires, so we had an alignment done. While they were doing that, they said we might want to have the shocks checked. We had the tires rotated and put the front tires to the back and put two of the newer back tires on the front. And while they were doing that, they did see that one of the front shocks was leaking. So Terry checked around for a place to do it. We found a truck stop in Elkhart where a friend used to do all his service work. They would order the shocks and install them. We had that done yesterday. Our appointment was at 8:30 and they were done at 9:30. They were very gracious and we think we have found a new service business for Phaeton Place. So now all our service work is done, the upgrades Terry wanted to do. . . done. So she should be ready to go. We have her over here at the condo in preparation for a month long trip into Wisconsin, but not sure when we will leave now. We have some urgent business with the apartments and we are hanging out here till it gets done.

We do think we will head down to Warsaw to the fairgrounds for the weekend. That way we can spend some time with Mom and Dad and be a bit closer to them. We may head over to Shipshewana when we leave there. One of our favorite places and we never get a chance to see all the shops, so perhaps we will do that.

The dogs were sick last week. Not bad, but apparently they picked up kennel cough from their one night in the kennel while we were in Indianapolis. They had the appropriate vaccinations, but they can still get kennel cough, just not as bad. We found a wonderful vet up here and the dogs did very well with their exams. They have some medications and started responding very quickly to the treatment. They seem to be better every day. I am so glad I took them in when I did. They were sniffing, snorting and sneezing. While it wasn't bad, it did get worse daily and they would occasionally wake me up at night. They are so sweet. I hate that they got this. We won't be boarding again. . . we will try and find a pet sitter if we need to be away overnight.

Our neighbors were over the other night. They have wanted to look at our Alaska pictures and they are embarking on a cruise next week for Alaska. They were more interested in the places they are going on their cruise, the Inside Passage, so I just concentrated on those pictures, since we were stopped at every one of their stops. They really enjoyed it, I think. Dave, especially, is excited about seeing the places we had pictures of.

Speaking of Alaska, our friends who did the trip with us were up to Elkhart for the weekend. They came over to visit Saturday night and then we all went to dinner at Heinnies. Great prime rib! They were in the area to sightsee and also visit a niece who lives in northwest Indiana. On Tuesday morning before they left, we met up again and had breakfast together. It was great seeing them and I'm sure we will see them again before we head south.

Grandchildren are such a blessing. God's gift for growing older, I think. Two of mine arrived with 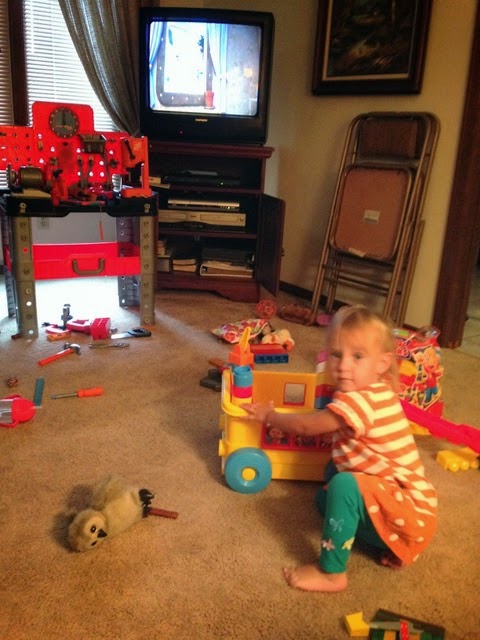 their parents on Sunday night. We didn't hang around the house that late, 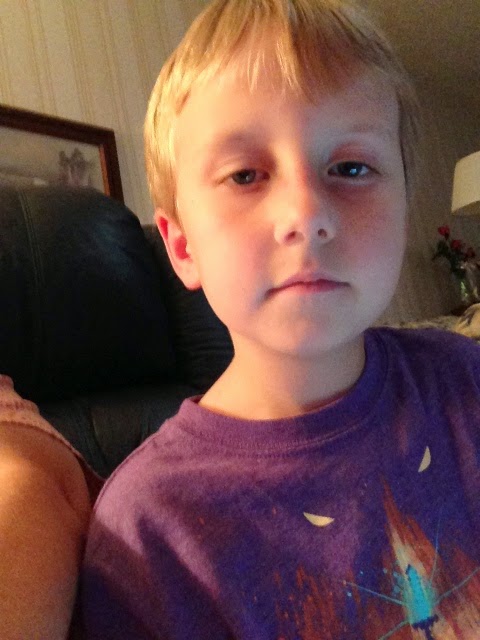 opting for the sanctity of the motorhome, our official home. Jocelyn posted a picture of the kids around 1 a.m. They had drug the toys up from the basement rec room into the living room and were playing, contending they "weren't tired." LOL

So we went over Monday morning and spent the day with them. We had a really nice visit and Jocelyn and Tom got to take off and go grocery shopping. They have so many life threatening allergies, including food, in their family, that we don't cook for them. . . instead they bring their food and do their own cooking. One reason why we stay in the motorhome while they are here. There was a rainstorm while they were gone and Ronan gets a bit antsy. . . he doesn't like to hear the rain and when you have two skylights in the house, it makes it a bit loud. So he put on his noise cancelling headphones and was fine. It actually only thundered once, so we were good to go. 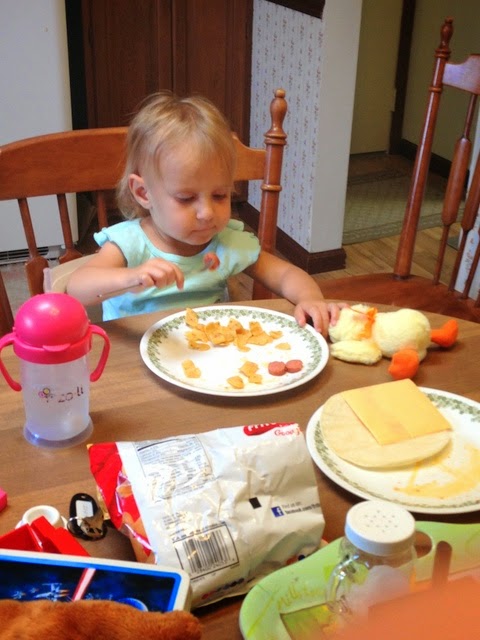 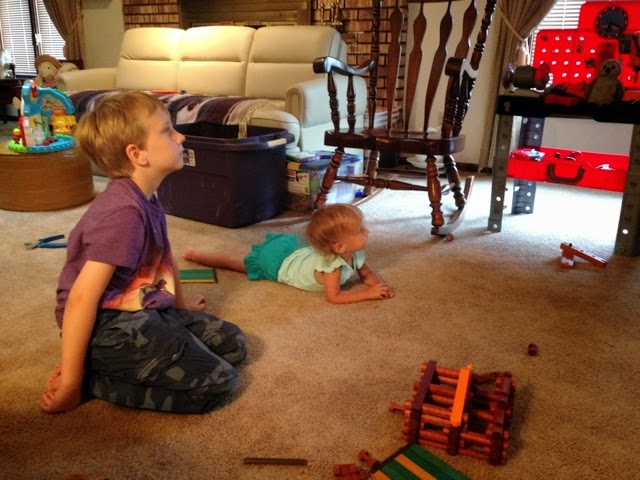 supper later. They were so good. Aenea chatters all the time when she is around familiar faces. She won't talk when she meets the neighbors though. Typically two year old. LOL  Neither did Ronan, though. Ronan has never cared to talk with "strangers."

It is colder this morning and a cold front is expected to lay over the area for a few days with a high today of only 66*. Brrrrr. But that won't be that bad. Terry has MinnieMee over at the hitch shop getting a skid rail repaired. Shouldn't take long and then we will take her back over to storage. We are looking for a small toad to pull behind her so we can take the girls out in her and leave them in the rig while we go sightseeing. Right now it would require taking them with us in the RV and leaving them sit somewhere in the rig while we explore. In mild temperatures that's not a problem, but we cannot do that when it is hot.

Well, the girls have caught and killed two ground squirrels. It seems that Butterscotch does the flushing out and Duchess joins the chase and goes in for the kill. We don't encourage this behavior, but hunting for vermin is what Scottish Terriers were bred for. They would rid the farm of vermin. Probably anything on/in the ground was "fair" game. I am surprised that the girls are fast enough for the 13 banded ground squirrels, as they have multiple holes dug which provide a safe haven. The dogs need to catch them far enough away from an access hole to nail them. Duchess grabs them in her mouth and delivers a couple fatal chomps. She releases them then and they are normally breathing their last. I know when the girls lived on their farm, they hunted daily and it is good exercise for them, so they get a bit of that here. Duchess is afflicted with Scottie Cramp, which is an episodic condition when she is excited and results in her back legs going stiff and her gait changes to a "goosestep." Once she relaxes, she is back to normal. We had not seen this but once with her, but with the ground squirrels all around, she has done this several times. My concern is she might hurt herself if she were to take off running and her back legs weren't working, so once we observe it, we slow her down to a slow walk and allow her time to relax. It has no lasting effects. Those of you who knew my Neal who was afflicted with Cerebellar Abiotrophy or CA. . . this is not the same condition and it is not progressive in any way. Totally different conditions.

Yesterday was grooming day and off they went early in the morning. We picked them up later in the afternoon and they looked and smelled so good. I took the opportunity to wash their bedding while they were gone. They are beautiful. We walked yesterday afternoon and ended up down at a friend's house in the park. Butterscotch wanted up on Roger's lap where she lay until it was time to go.

Today we are headed over to the "storage condo" to clean. Jocelyn, Tom, Ronan and Aenea are coming this weekend. We are anxious to see them. It's too long between visits when wee grandchildren are involved!