The holidays are here. Things start ramping up after Thanksgiving with people putting up Christmas decorations in the parks. Where we live we have five parks in close enough proximity to take the golf cart and go to each of them. The other night Mom and I rode through all five parks to look at the decorations. Some parks that had a lot of decorations in years past, have very little this year. But one park which normally doesn't do much really has a lot of decorations this year. It was fun to visit all of them and see the different displays.

Most of my Christmas shopping this year has all been on line. Even having stuff giftwrapped, I think I still spend less than if I got in the car and went shopping. And it's a great time saver, that's for sure. I used to like to shop just to get into the Christmas spirit, but I don't seem to get that down here in Texas. I used to love shopping in my hometown when the stores would be open in the evening and snow would be falling. It seemed like a magical time. But I don't really care to be out in that cold air anymore. We actually had some cold weather in Indiana before we left and we really were so not used to it that we were both quite uncomfortable.

Our days are spent doing what we want, which isn't much. . . retirement is great! We do some 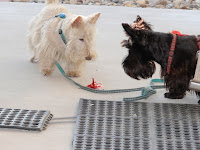 walking the dogs and that is several times a day. When they get back from their walk, they always want to go visit Mom and Dad. They love going over there and checking under the table for any scraps that may be left over from supper. LOL On the way back tonight, there was a piece of red tinsel that blew in off somebody's display and the dogs thought it was alive! Haha. What a sight. They both barked at it and pounced on it. Course it was moving because the wind was breezy at the back of the pad and it would sorta swirl. They got all excited and pounced on it and observed it growling and barking. Those were some brave Scotties, I tell you. I took some pictures and a movie, but failed to get the movie transferred. I really have to work on that skill. Since I always delete the pictures after transferring them, I deleted the movie before I realized I didn't have it.

and some December pictures. We still can't believe it. We trimmed one of the bushes and are waiting to see how it handles being whacked on before doing more. We have taken some seed pods from Spike, my golden barrel cactus and are going to try and

start some. We've had a lot of people ask

where I got him and it was in Phoenix, so they can't go right out and buy one. I haven't seen another in the park.

Today I made fruitcakes. Before you groan, this was Terry's Uncle Bill's recipe and is all fruit and nuts with no flour and it is totally gluten free! It uses coconut and sweetened condensed milk as a binder and it is a fruitcake for those who don't like fruitcake. . . like me. Then later I made divinity. Never have made it

before and always wanted to. I think it is a very festive candy and I love seeing it,

but I'm not much for eating it, but it is good. Mom said it was very good.

I have been starting on my sewing. I got two pairs of jeans shortened and have a couple more pants to do as well as some shirts. When you're short, you have to do that. Tomorrow I will probably do laundry. It's a snap in the new Texas Room, but I still do a load every week in my motorhome washer/dryer. That will keep the seals from drying out, etc. While I'm out there in the Texas Room I will get things straightened up so we can have Christmas out there Wednesday morning. I still have the table set up for wrapping, etc., but we're all finished with that.

We've had a couple golf cart parades through the park. That's always fun to watch. They decorate their golf carts and some are pretty ingenious. They put lights and other decorations on them.

Earlier this week, Dad decided he wanted a bicycle. He thought he would be able to ride a trike. Since his knee surgery three years ago, he hasn't gotten much exercise and he decided he needed to do 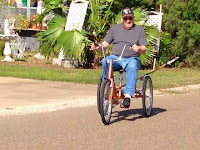 something. Walking is difficult for him with his back problems, so we went looking for a bike. We found one and they bought it and we brought it home. I have to say, he has ridden it every single day. He has ridden around the block which is a big thing for him. It doesn't seem to make him winded either, like walking does. I am so glad to see him up and doing something like this. Even if he just rides around the block once, it's good for him. On really windy days, he has been doing laps in his driveway. He actually can do that and spin it around on both ends.

Wednesday we go to the hall for Christmas dinner. They will have ham and turkey and then everyone brings a dish. It's always a feast, like Thanksgiving and we always look forward to do.

I have some pictures of my beautiful grandchildren. Ronan and

Aenea got to open a gift from me the other night. I think they enjoyed them. I got Aenea a baby doll and Ronan a Mike the Knight castle playset. The last is a Christmas picture of Brynlee, 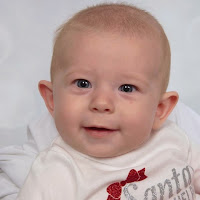 We made it to our lot in the Rio Grande Valley on Tuesday before Thanksgiving. We got set up and visited with Mom and Dad a bit. Mom made supper for us so that was great that I didn't have to stop everything to cook. 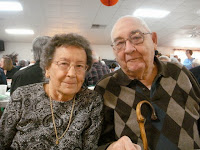 We made it to the hall for Thanksgiving. That is always a fun time, 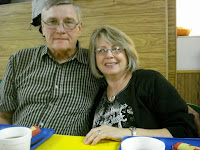 wonderful smells, happy people, and lots of good food. Got a picture of Mom and Dad and one of us as well. 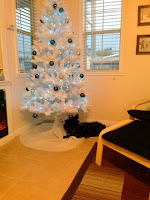 My cactus are huge. I can't believe how much they have grown. Our lot looked so sparse before we left last spring and now the cactus have taken over. We are going to do some pruning because Terry wants the "bushes" to grow into "trees." We have seen their parent "tree" and that is what we are going by. This cactus doesn't have spines, but it does have fine little hairs that can cause some irritation. The "twins" which were single stalks I planted have grown large arms and both have three arms on them. I will try to get some updated pictures.

"Red," my poinsettia started turning red again. She does that around Christmas. She is green the rest of the time, but starts getting red late in the year. She also has quit sprawling out and is growing up bushy now, which is pretty cool. I was told she was not the "type" of poinsettia that would survive outside planting. . . hmmmmm. Guess someone didn't know anything, eh?

The girls seem to be adjusting to the routine of retirement. They would like to chase the bunnies they 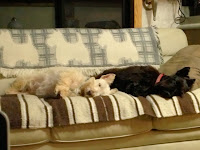 see here in the park, but they must be content to whine from a distance. LOL We walk several times a day down to the dog patch. They sleep a lot of the time. We have been taking them out on the patio on nice days and let them watch what's going on in the park. That way we can run back and forth to the Texas Room. They like the Texas Room, but they cannot see out. We are going to get a new storm door installed that has glass down low so they can see out. I think they will like it better then.

Having an issue with the little truck. Coming back from church this morning, I smelled antifreeze. When Terry checked the radiator, he couldn't see any fluid in it. . . not a good sign. It hadn't been running hot, though. He added water later and we will be taking it in for service later this week.

Have most of our Christmas shopping done. . . . did it mostly online. That is just too easy. But it's better than fighting the crowds.

We will be going to the hall for Christmas dinner in a couple weeks. Another good dinner is in the works!