Still in The Rio Grande Valley of Texas. 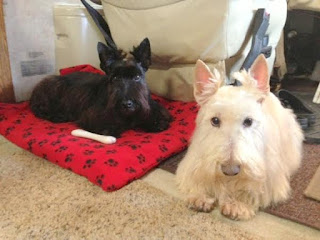 Butterscotch has a couple of vet appointments coming up the next couple of weeks.
Looks like the earliest we'll be heading out is around the 10th of March. Butterscotch has been fighting UTI's for the past year, but we've finally found the cause. She has hundreds of sand like bladder stones which irritate the urethra when urinating. The vet has scoped her and found no cancer so far which was our greatest fear.

When eventually leave our place down here in Mission. We will travel along the Gulf Coast visiting friends and family and on to Florida, where we'll  see Brandon and family.

Still hanging out in Texas

Been back in Mission Texas for almost a month after our 10 day trip to Indiana for my cousin Debi's funeral. The weather has been fairly good with days anywhere from 70's to the  90's and most nights are in the low 50's. So overall we've had a much better winter than the last two years, without hardly any rain. We haven't done much other than go to some street dinners, see some entertainers and attend rock and roll jams. The rock and roll jams are much more preferable to the incessant off key warbling of the country jams, which are stuck in the 40's and 50's eras.

Dale has been spending much of her time working on organizing the tax information for our tax preparer in Indiana. Hopefully she gets the rest of the tax documents in our forwarded mail Monday or Tuesday so she can finish up. This will be the last year of this major effort since we now have only 1 duplex instead of the 5 duplexes we owned at the start of 2014.

Dale's parents ended up not coming south this winter, so we are thinking about heading out the end  of the month and seeing some friends along the way to visit our son's and daughter's families. That will give us almost two months to make it to central Indiana for our spring doctor's appointments at the end of April, rather than the normal one month.

I'm signing off, think we may be taking in the patio sales here in the park this morning.

Terry, subbing for Dale.
Posted by Dale at 9:36 AM No comments: