We arrived in Melbourne safe and sound and got set up in Wickham Park. We actually arrived a day earlier than expected, but we were able to add a day on to our reservation. We had some trouble with our lights on the toad (when hooked up) and Terry needed to troubleshoot it.

The kids are really busy. Brandon works from home but while we were there, he was having to do some travel. Brynlee was in school every day and Megan is busy doing volunteer work at Brynlee's school. She does a number of things to help and it's almost a full time job for her!

I did get to spend lunchtime with Brynlee one day and that is always a treat. She likes having her Grandma's come and we both enjoy it. I also got to sit in on another ukelele lesson. She is doing so well with that. She has picked it up quickly and she has a really good instructor. She pays close attention to him and on some songs she plays he will sing along and sometimes play his guitar. He is extremely talented as well and I hope she continues her music education. He is teaching her to read music and to play by plucking the strings and strumming both. He is a great teacher and she is a great student.

We returned to the Partin Farm Corn Maze and Fall Festival. We had gone last year and it was fun. It was warm, but not as warm as last year. We usually stay in the shade and eat lunch and stay hydrated! 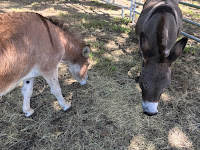 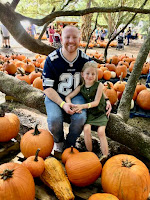 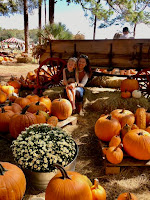 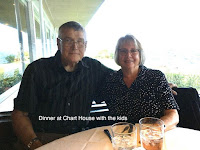 We went out to eat several times with the family and we also include Diane, Megan's Mom. She lives about a 30 minute drive away. We also watched Brynlee some when the kids were gone. We enjoyed Lily, too. She is their Golden Doodle. She is a real trip. She loves to play ball. I also bought her a frisbee. She didn't know what to do with it, but eventually got the hang of it. She will bring it back, but she likes to run with it for awhile before letting you have it back.

There have been many changes in Wickham Park as far as camping goes. There have been two deaths in the campground in the last year. One was a man who was murdered and left in an RV and the other was a woman who died in her RV while camping there.  They have made stricter rules for behavior and more restrictions for tent campers. There were a lot of homeless who just stretched tarps over picnic tables and lived under them. Not a good situation for anyone.

We took time during the day to visit some RV communities where we were looking for a lot to buy. We would like to be able to come to Florida anytime and not worry about getting a campsite. But also, since we no longer have the place in Indiana, we would like to find someplace to call "home" where we could spend some time in the event one of us became ill. Indiana was not good for that because it got too cold in the winter. Texas fits the bill weather-wise, but we have not found good doctors particularly for Terry down there. Since Brandon is adamant he wants us near him, we decided to start looking in Florida. As it was, none of the places we looked had anything that fit our needs, so the quest continues.

We left Melbourne on the 28th and planned to start a "winter roost spot" search in earnest. We are not going to give up our travel, but just find a place to put all our "stuff" and where we can spend winter particularly.

We arrived in Charolottesville on Monday, October 7, and spent a week visiting with Jocelyn, Tom, Ronan, Aenea, and Pepper. We had a great time but we had some snafus along the way.

We had to drop some mail at the post office so we went there before going on in to the kids' house. Took our stuff in, got it mailed and went back out to the car and it wouldn't start. It tried, but would just not turn over. So we called our road service, then called Jocelyn. Jocelyn got there before the tow truck driver and had everyone with her. So they kept us cool and collected in their car while we waited. It didn't take long and the tow truck driver sent us on our way and towed the car to the Ford dealer.

Jocelyn took us around to car rental agencies and every one of them wanted $65-$110 a day for car rental. So for 3-4 days it could cost several hundred dollars because, of course, they didn't have any of the "cheaper" ones available. The kids have two cars, but the Crown Vic they don't drive because 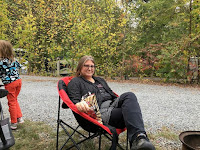 they said it needed tires. We decided to cut our losses and take the Crown Vic and put tires on it so that it would serve our purpose and be back in service for the kids. A win-win. 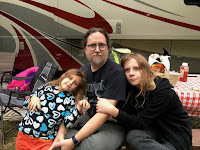 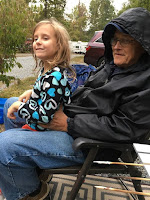 While we were there and I was visiting with the kids, Terry finished the job of hanging the storm door on the front of the house that Jocelyn had started. She is not afraid to tackle anything and she did a great job hanging the door, but needed help with the hardware. Terry was able to get that job done for them.

We had some chilly weather while we were there, so Terry and I didn't do any outside activities with the kids, but they enjoyed coming out to the campground a couple times and we had a fire and roasted hot dogs and marshmallows. Fun times with the kids for sure. We spent some time at the farm where the kids have a "share." We help pick fruit and pet the farm dogs. 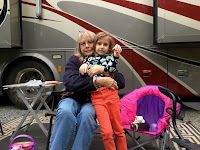 We got our car back in the middle of the week. It was the fuel pump and a fuel modulator. Expensive stuff, but thankfully, they got the job done right apparently because she's run fine every since. It was amusing to a couple of the service writers because they were talking about how they never see any Ford Flex's come in on the hook. . . everything else, but never the Flex. Then they looked up and  saw ours come in under tow. LOL Oh well. She couldn't have broken down at a more opportune time and I am grateful for that. We weren't out in the middle of no where. . . we were where family was just a phone call away.

Our time with the family was soon over and we left on Monday, the 14th of October and headed south to Florida. We took our usual route down 321 through South Carolina, staying off I-95 for this part of the journey. It was an uneventful trip and we arrived in Melbourne, Florida on the 17th.

When I last wrote, it was before the closing. The closing went off without a hitch on Tuesday. It helps that we know the buyers. . .  they have been friends for many years and they bought the other four duplexes, so it wasn't our first rodeo. They have been great to deal with and even helped us get stuff out of the basement of the house. They have made no demands on us and required no inspections. In turn we gave them a great deal on the house. So everyone was happy.

We never went back to the house after that. No need to. We did go by one day when we went to see Uncle Dan one last time. The buyers have not started to do any of the changes they mentioned because they are busy correcting some major concrete work with one of the other duplexes. They do plan on updating the interior and changing some of the landscaping. When we return to Indiana next spring, we will see what things look like then. 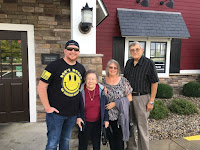 We finished out that week at Elkhart Campground and said goodbye to all our friends there. We then moved over to the Goshen fairgrounds. We were still finishing up some doctors for the summer, closing a bank account, and visiting Mom when we were able to. After a week there, we moved on down to Warsaw. We spent every day then with Mom. She sleeps late, so we usually went in to see her in the early afternoon and then stayed till after dinner. Sometimes we went out and sometimes we cooked. Brandon flew up to go to a Purdue game and while he was here, we took Mom and went to Lafayette and had dinner with him at Red Lobster. It was great to get together again.

At the end of our time there, we moved on down to New Castle and stayed at Summit Lake State Park. This is near where we lived when I was working and the kids both worked summers at this park. We were there to see our internist. Everything is well and we left there yesterday morning.

Yesterday and today were driving days. We stayed last night at a small park near Grayson, Kentucky, where we had stayed one time before. It's called Valley Breeze and I do remember the park once we were in and set up, but I hadn't remembered going there. While there, we met a couple from Ontario who were going to Gilbert, West Virginia, for a trail riding event. I read up on it and it is quite a fanfare. It seems they have events and things to do for everyone. Lisa and Larry visited us in the evening to talk about fulltiming, boondocking, and trail riding! It was great fun and we enjoyed visited with them. Happy Trails, Lisa and Larry!

Today we left Kentucky and are settled in a "new to us" park in Wytheville, Virginia. We will be here two nights and then we move on to Charlottesville. Our reservations there start Monday and we will be there for a week. We are really anxious to see the kids and grandkids.

So that catches you up with us. Now that Terry is more stable and we have the landlording business behind us, I hope to keep up with the blog better.