We left the RGV on Monday. Made it to Houston and on Wednesday put my 92-year old Mom on a plane nonstop to Indy. First time she had ever flown by herself, but she had always insisted this was what she wanted instead of having a "babysitter." I put her in a wheelchair right away and got a gate pass so I could go with her to the gate. Southwest Airlines was wonderful with her and I left her in good hands. We decided to exit Houston once her plane was off because bad storms were headed our way. Actually by the time we were pulling out of camp, my sister had already intercepted her at the Indy airport and all was well. We drove to Kinder, Louisiana, to try and escape the storm chasing us there.

Along the way my sister reported that 15 minutes after leaving my Mom at her house to "take a nap" she had fallen and they were awaiting the ambulance. Turns out she cracked her pelvis in 3 places, but thank God, who was watching, there were no broken hips. She will soon be transferred to a nursing home for rest and rehab. I know my Mom will try. Surgery was not called for because neither hip was broken and this is the standard treatment. I'm sure she will always use a walker from now on but we all thought she should have been anyway and she refused. I asked Mom if she wanted me to come to her and she said, "Heavens no. There is nothing you can do here. I'm being cared for." So we will move on and in two weeks will be back to check in on Mom once we arrive for doctor appointments as we planned. I only get to see my grandkids twice a year for one week as it is and Mom knows how important that time is. 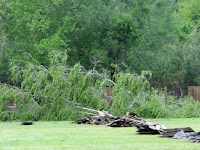 In the meantime, we were at Coushatta Indian casino and Red Shoes campground at Kinder, Louisiana, to dodge that storm rolling through Houston and had a tornado hit our campground at about 5:15 am yesterday morning. It flipped a 30' trailer over about 100 feet from us and then passed on to the perimeter fence where it took out about 600 feet of board fence. Then it crossed a small field almost directly hitting a house, tearing the roof and twisting and downing trees around it but leaving the main house intact. Before crossing highway 165 it hit a new motel and left the metal roof in pieces strewn across the lawn and highway. Next time I vote for staying put. 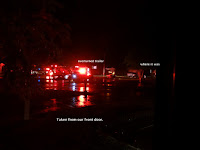 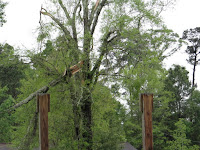 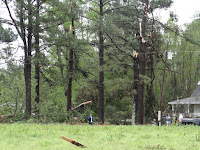 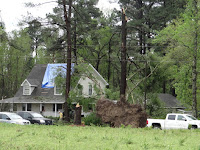 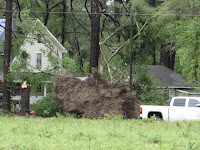 Power was out in the camp till noon when we left. We heard the occupants of the trailer were okay. EMTS and workers arrived very quickly and pulled the residents out the top which was actually the side escape window since is was laying on its side. I think it would have continued to roll but it had rolled into a picnic table which seemed to hold it. 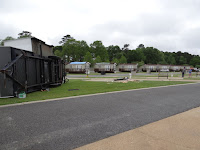 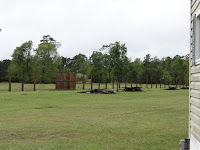 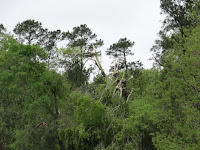 Living in the midwest all my life, I've seen enough tornadoes for a lifetime and don't need anymore. This one was so quick, almost just a microburst of wind, but the telltale twisting of the trees was there.

We are now in Zachary, Louisiana, visiting Terry's cousin and wife. We had a fish fry last night which is second to none at Gary's since his hobby for 30 years has been as captain of a fishing service off Grand Isle. Hmmmm hmmmmm good.

Take care, and stay safe out there.

We're on the road again. Today we left our winter spot in the Rio Grande Valley. The past week has been spent, putting stuff away, doing some maintenance items on Phaeton Place and “summerizing” our Texas lot and Texas room.

Dale's mom, Alice moved into Phaeton place yesterday and we closed up her place for the season. At 92, she's not planning on returning this fall and we will be hopefully selling her place for her.

Tonight we are parked on a camp site at Gateway to The Gulf RV Park, on the south side of Victoria Texas. This made our travel today about 250 miles, after closing up the Texas Room this morning. Tomorrow we have only about 110 miles to cover to Advanced RV Resort in Pearland Texas, which is south of Houston on Texas 288. We hope to visit with Dale's cousin Jim Turley, after we check into the RV park.

Wednesday morning will be an early riser for us since we're taking Alice to Houston Hobby Airport for her flight to Indianapolis where she'll meet up with her other daughter Nita. Dale has it all set up for her to accompany her mom to the gate, to make sure she makes her flight.

Thursday we're off heading east toward Virginia to see Jocelyn and family. Late April we need to be in Central Indiana for our spring doctors appointments.
Posted by Dale at 9:31 PM No comments:

And Now for Something Completely Different!

Our plans this spring will be different. Normally when we leave Texas, we travel across the south to Florida to see our son and family, then up to Virginia to see our daughter and family. This year will take us straight to Virginia, bypassing Florida. After Virginia, we head to Indiana for our 6 month doctor appointments. After that, we head to Florida for an extended stay. Our son's MIL has just gone on dialysis and is not well enough to babysit for their 4 year old. Brandon earned an incentive trip with his company, so he and his wife are going to be gone for a week and we agreed to babysit. That's why we changed our trip around, so we could get our doctors out of the way. We have decided to spend more time in Florida once they return, maybe getting some windows changed out on the coach and some other work done. At 12 years old, she's starting to show her age. We decided to spruce her up rather than buy new again.

We will hang around in the south until Terry's family reunion in Mississippi in June, then gradually work our way back to Indiana for 3 months. We still have one rental and hope to begin cleaning it out and getting it ready to sell.

Last year we both had surgery, so our travel was extremely limited. But this year we are both in great shape and will be able to do what we want!