Since my surgery was such a "major" event, we haven't tried to do anything very strenuous. I just cannot do anything like that yet, but I am happy to say that I am able to do some driving. As many of you know, I have been the primarily motorhome driver for several years. But Terry has stepped up to the plate and taken over some of that duty. As usual, he does a great job. He didn't give it up because he couldn't handle it. . . he just was nervous about his heart condition and driving such a large behemoth. I continue to improve and I am back driving now. Still two drivers in the family!

We camped over Memorial Day weekend at Remington, Indiana, at the Caboose RV Park. We stayed there because we needed to be close to both Indy and Lafayette, and everything parks closer to Indy were booked up for the Indy 500.

We were able to attend our great-nephew Nate's graduation party which was really nice. It was held in a building at a park in Lafayette. It was a great venue, indoors with a kitchen and restrooms. It doesn't get much better than that! Nita and Jim were there and had brought Mom with them, so we got to see her. We opted not to go to graduation proper because it would have required my sitting on bleacher seats which would still not be comfortable for me and nearly impossible for any period of time. But congratulations to Nate. We love you and are very proud of you. Good luck at Purdue next year! 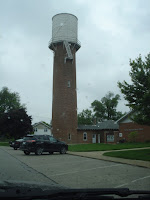 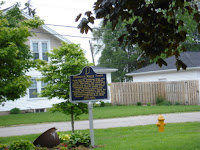 We did a little sightseeing around the area, since we haven't been here for years. Remington has an interesting water tower which is brick and wood. It is quite unusual.

We also drove up to Rensselaer, Indiana, to look around. There is a small liberal 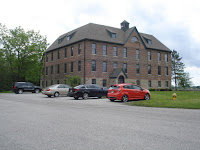 arts college, St. Joseph's, which is closing its doors this year. It's a beautiful campus and it's a shame it will close. Maybe another school will buy their buildings and continue higher 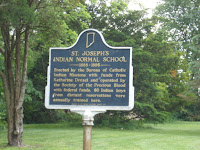 education at this location. While we were there, we saw an historical marker about an "Indian normal school." These were schools founded for the purpose of assimilating native American children into white society. One of the buildings there on the campus was built as a school/dormitory for Indian children. That building is currently used as a dormitory for the college. I did some research on this particular school and found that it was one of two Indian schools in Indiana. The other was at White's Institute which is near Wabash.

We will leave here after Memorial Day and start heading south for our family reunion in Mississippi! I am driving again and all is well!

Happy Mother's Day to all mothers out there and particularly to my almost 92-year-old mom.

Having left our roost at the Indy KOA for good on Saturday, we traveled with Terry at the wheel to the fairgrounds in Warsaw so we could visit Mom on Sunday.

As we have done for the past several years, Jim, Nita, Terry and I and some of Nita's other family, took Mom to eat at the Honeywell Center in Warsaw. It was a good dinner and we enjoyed all the visiting we got to do.

It's been several weeks since I have blogged. Fortunately, Terry has taken up the pen and done the duty for me. Much like he has done everything else for the past couple months.

My back surgery was March 24. I don't know what I was expecting, but suffice to say, I got more than I wanted! Pain that is. I had multiple, I think maybe four rods placed, along with what looks like six screws and two cages. The doctor's comment was, "She's not gonna feel like doing much of anything for the first month." Truer words were never spoken. But pretty much one month after surgery I was doing well and much of the pain had subsided. Pain pills are a godsend I must say. 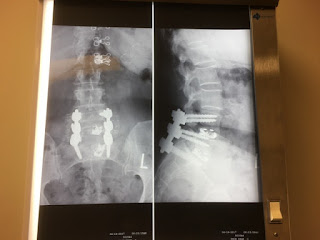 We started walking the week after my surgery. At first I would do 3/4 to 1 mile. We walked the Washington Square Mall. That's is very close to where we are camped and they open for mall walkers at 9 a.m. We've also walked Castleton and Greenwood Park Malls. The last two are still pretty decent malls. Washington Square is dying and it truly is a tragedy that yet another of the icons of years gone by are fading away. I suspect within a few years that mall will be gone. We are now walking two miles in the malls in the morning and in the afternoons we walk Duchess usually on two half-mile walks around the campground.

As the weeks rolled on, the pain diminished and at about five weeks the surgery pain was pretty much gone. This is the last pain to leave. . . it's the one at the base of your spine. I kid you not, every time I would move, change positions, or get up out of bed or a chair, it felt like someone took a butcher knife and stabbed me in the back. That's as close as I can come to describing the pain. And this pain was there even with pain pills. I can honestly say I was starting to get a little depressed, so we planned a few little outings to keep things interesting.

Riding in the car is a challenge. Short hops are fine; but we have made two trips up north to see family and after two hours, things start aching. I still am taking the occasional pain pill for moments like that. My legs get "restless" and my butt starts to hurt. I did buy some gel cushions for in the car and those are helping. I also wear my back brace in the car and that helps. I'm guessing it helps to stabilize my back.

It's now seven weeks post surgery and I still have the same restrictions. Basically I can't do anything. I am up though and I have driven some, if I haven't taken a pain pill. Picking things up off the floor is difficult because I can't bend. I help with dishes, but I not supposed to do things with repetitive motions. I don't do things every day, but occasionally I help set the table, etc. It feels good to be a team again and I don't overdo it. Terry keeps a watchful eye and will remind me. He's getting me back for all the times I "remind" him about stuff he's not supposed to do. LOL

Saturday we will be leaving Indy KOA and heading north. We are spending a couple nights in Warsaw as we are all taking Mom out for Mother's Day. Then we will spend a few days at the house. We hope to work on it some this summer and start cleaning it out in preparation for selling it. We use it so infrequently that it doesn't pay to keep it. We will never live there permanently because Terry can't stand the cold weather in the winter, so we need to work at getting it sold.

We are toying with the idea of heading to Mississippi for the family reunion. We are going to try to do it, but whether we succeed will be determined by my being able to withstand the travel. I'm hoping the motorhome with its air suspension will be better than riding in the car.

So that's where we stand now. Things are going very well with my back. My limp is slowing fading and my bursitis is also healing. The two conditions were related to my back problems and are starting to correct themselves as the back heals. Whoo hoo!