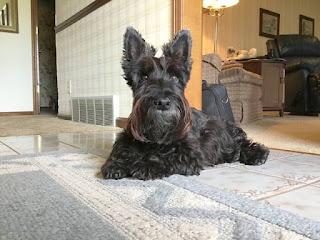 Duchess Diane of Dundee, affectionately known as Duchess or "Duckie" passed away on Tuesday, January 15, 2018, in Weslaco, Texas, at Border Animal Hospital. She died in the loving arms of her human.

Duchess was born on Killdeer Farm in Tanner, West Virginia, and lived on the farm until she came to live with Terry and I along with her sister, Miss Butterscotch of Killdeer, aka Butterscotch. Her parents were Mister Dickens II of Killdeer and her mother was Chantilly's Midnight Lace. All three preceded her in death.

Duchess had enjoyed good health until her sister Butterscotch died and then shortly after she developed diabetes. It took some time to get this disease under control and as a result, she developed cataracts and became blind. Late last year, she also seemed to become deaf.

Last week Duchess became quite ill and refused to eat. Attempts were made to remedy this but eventually she refused all food and became very week. She seemed to have no joy left after the blindness and deafness, so we decided to help end her pain.

She is sadly missed by Terry and I and life will not be the same.

R.I.P. sweet girlie. We love you. Our hearts are broken.

It was decided to donate all her beds, toys, dishes, food, medical supplies, etc., to a no-kill animal shelter in Edinburg, Texas. We are assured that new adoptees will get to choose toys that once belonged to our girlies.

Rest assured that she and Butterscotch are running free at the Rainbow Bridge and will be ready to greet us when we get there.