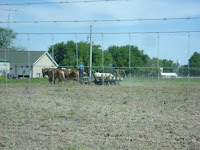 Once we left Remington, we headed south to an area known for its 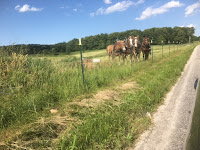 Amish settlement. It isn't nearly as big as Shipshewana and seems like it isn't quite as conservative, but we did see a lot of horses! It's that time of year where the farmers are out tilling and planting their fields and the Amish are no different there 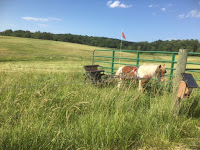 except they use draft horses to do the heavy work. They are beautiful animals.

We also checked out the Amish stores in the area and bought a few foodstuffs we like. We did eat at the Gasthof, where we have eaten once before. We had a good meal and enjoyed not cooking ourselves!

The next day we drove down to Glendale Park, which is a fish and wildlife area. They have a nice campground and probably one we would have enjoyed. We were okay where we were at, but it was not real easy negotiating with a big rig.

Tomorrow we are heading for the Land Between the Lakes. . . the area between Lake Barkley and Kentucky Lake.