A week or so ago, we closed up the house and took off in Phaeton Place for the Warsaw fairgrounds. We stayed there for a couple nights and visited with Mom and sister Nita and husband. We enjoyed a great visit. Mom is in great shape for 93 years old with no real complaints.  She is living in her own house, a park model in Nita's woods, and is as independent as she wants to be. Nita visits every day and sees to it that she has what she needs. All the same things we did for her when we would be with her in Texas for the winter. But Mom has decided she will not return to Texas anymore. Our job is to sell her place when we get there and we hope to get that done pronto.

After leaving Warsaw, we went to New Castle and set up camp at Summit Lake State Park, near our former home in Mooreland. We stay there and do the rounds of our doctors which we kept when we went fulltime and travel all over. You gotta' be somewhere for doctor's appointments, so we stick with our old providers.

We managed to have some fun at the same time by visiting with a colleague of mine. They have a Scottish Terrier, Baxter, and he and Duchess got to visit. Didn't really do much together. . . they are like two ships that pass in the night. But it was a change of scenery for Duchess and she does enjoy their back yard!

Our yearly doctor appointments went well. Terry's doctor reinforced our thinking on his medical problems, particularly his heart issues. He confirmed that Terry can build his heart back up from where it is now and perhaps get back into the same physical condition he was in prior to getting sick last winter. That illness really dragged him down and reduced his heart function, but he is already doing better. It will just take time and we are working on getting his stamina back. Walking daily has already improved that, so we are hoping to continue.

We then saw his cardiologist in Indy. He made a couple med changes which we hoped he would. One med he takes is a rhythm drug and the doctor had scaled back on it. Other doctors have tried that, but it seems they all want to give it a go. But it doesn't work for Terry. So they are increasing that again. At least we know from the tests they did this summer that the med, previously suspected of causing lung problems, has not in fact done anything to his lungs, so they were okay with increasing it again.

So we are back on the road and heading toward Virginia to see the kids. . . at least the first round! We will get into Charlottesville on Sunday and visit with Jocelyn, Tom, Ronan, Aenea and Pepper for a week! Whoo hoo! Can't wait to see them. It's been a long summer without my grandkids fix.

We are currently camped at Camp Creek, West Virginia, which is a neat little state park we found a 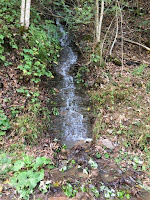 couple years ago. We even have a full hookup site and it's paved. There are 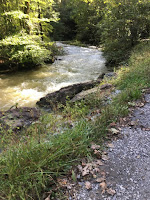 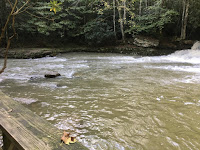 step outside. I was concerned about the level rising 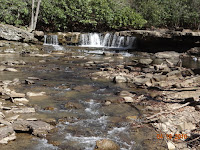 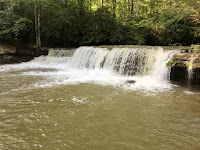 streams are raging pretty good right now what with all the rain they have had here. But they assure us the worst is over. The picture on the left and the picture on the right are the same MashFork falls, two years ago and yesterday.


We will go make a supply run today before leaving tomorrow. And do a little hiking.