Tail of the Dragon

We have three trips from Florida to Indiana planned for this summer in order to get all of our household stuff here at our new home in Florida. This second trip was to fetch Li'l Red, the Miata, and drive her back. Terry thought it would be fun to take her on the "Tail of the Dragon." The Tail is a mountain road in southern Tennessee, northern North Carolina which encompasses 318 turns in 11 miles. 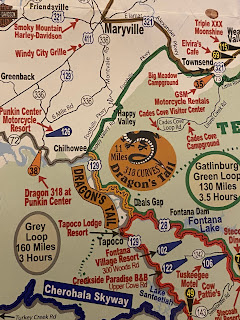 So on June 20, we flew to Fort Wayne and picked up our rental car. We drove to Claypool to see Mom. Since we are still social distancing, we visited with her for about an hour on her porch. Well we were in the yard and Mom was on the porch. From there we drove to Nappanee where the Miata was stored. We reconnected the battery and she fired right up. So we each drove a vehicle back to Fort Wayne to the hotel. We decided to spend the night there because we needed to return the rental the next morning.
The next morning, we returned the rental, put the top down on the Miata, and took off for Florida. We took mostly red roads, the two-lane roads to enjoy a slower pace. Terry actually drove all day the first day! Yay! I had a break from all the driving I do. But he had a sore neck from putting together all the IKEA furniture we bought the week before, so I drove the rest of the way. 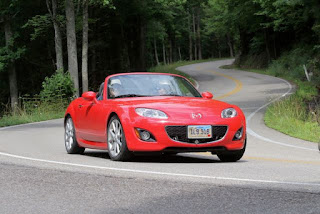 We spent the first night in Richmond, Kentucky, and the next night in Lenoir City, Tennessee. The Tail starts south of Maryville, Tennessee. We were pretty pumped to do the Tail. It is a destination for a lot of motorcycles and sports cars. Terry said some of the Miata groups do the Tail. It has 318 curves in 11 miles. Along the way are photographers who take pictures of your vehicle and then they put them on their website and you can purchase them. I got one from killboy.com and the other from 129slayer,com. You can go to those sites and look at all the picture of cars "doing the Tail." 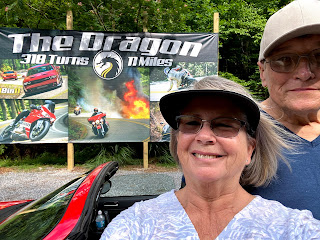 We stopped at Punkin Center which is ten miles north of the Tail. We bought a few souvenirs. When we 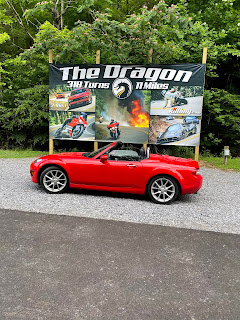 entered the road, we saw a  officer who was writing a ticket to a car! Hahahaha Back up the hill on the curve were a couple motorcycle riders who were taking pictures of the scenario. I think they found it amusing that a car and not a motorcycle was getting a ticket.
The road was very curvy, with second and third gear getting the most attention. It wasn't a difficult drive and quite fun in the Miata. I kept my speed down and didn't tempt the motorcycle cops. It didn't take long, but my shifting limbs did get a workout. At the southern end is Deal's Gap and there is a store there and a camp of sorts. Very fun. Bought more souvenirs! 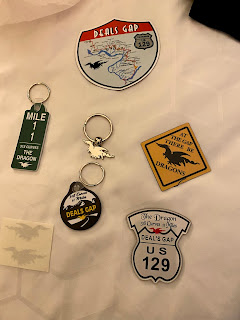 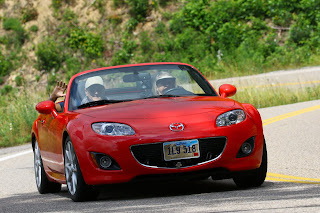 When we were done there we headed to the Cherohala Skyway. It's a road not unlike the Blue Ridge Parkway that runs along a couple mountain ridges. It was recommended to me that we not miss it. It was very pretty, lots of beautiful scenery, but we probably should have passed. Terry's neck was really giving him fits and he didn't get to see any of the sites. I got out a time or two and it was worth it, but it was a long ride. Unlike the Blue Ridge, there are not any roads intersecting, so once you get on, you must ride it to the end.
Once done sightseeing, we traveled around Atlanta through the mountains, rather than risk getting into a questionable area where demonstrations might be occurring. We had thought we would spend the night in Athens, Georgia, but the hotels there are downtown. As we were looking for them, we traveled through the town square and there was a demonstration going on there at 4:30 in the afternoon, so we kept going. We eventually, found a room south of Madison on I-20 and we spent an uneventful night there.
The next day we were up and I decided we were going to get home by evening. We actually got in before dark. Doesn't take long to unpack the Miata because the trunk is so small, we had to be careful to travel light!
So Li'l Red is spending most of the time under the canopy. She gets out occasionally, but we've been having rain most every day. She's waiting patiently for her next outing! 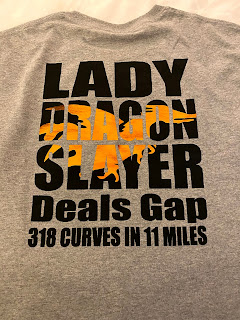