Settling Down for the Winter!

We did finally leave Houston. We had an appointment on Monday, the 17th, with the doctor. We found him on Medtronic's website. They have a site called "Traveling with Medtronic" for people who have Medtronic devices. Everyone we talked with had nothing but good things to say about him. He is a younger doctor, so hopefully he won't retire on us. We met with him and he went over everything in his charts and then said he would be happy to make the changeout of Terry's ICD. So the nurse came in and scheduled it for the following day! Whoo hoo! I will say that normally these changeouts happen quickly because one's life is in the balance. But it is nice to be treated so very well by the doctor and his staff.

As luck would have it, on Monday night with cold temperatures in Houston, our rear furnace went out. Grrrrr. It wasn't critical in that we didn't have to worry about the holding tanks freezing, but we weren't able to easily heat the bedroom. So I dug out our little electric space heaters for the last night we were there. Terry did some troubleshooting and determined that the thermostat was bad, so he called PPL Motorhomes a few miles away and they had one in stock. So we hopped in the car and drove to PPL to get it. Terry was able to install it and now we have the heat pump, but still no gas furnace. So at least we have heat and once we are completely settled in at our place, he will tear the furnace apart. He's determined that it's the control board in the furnace, so he will be able to do that.

Tuesday afternoon we headed over to the hostpial at 1:00 for his arrival at 1:30. He got checked into his room and then it was a constant parade of nurses and technicians doing what they do. While we were waiting my cousins Jim and Pat arrived. They visited with us before Terry went to surgery and Pat brought some knitting so I could learn how to knit! She has really been special for teaching me. I have been trying to learn crocheting and knitting and she's the only one who has offered to spend time teaching me this craft. She and I had made some scarves using "arm knitting." I had learned how to do it at an FMCA rally and I had already made one, but I had forgotten how to do it from start to finish. I had bought yarn for two more scarves, so we each made one. It was a fun project for two cousins!

Terry left about 3:45, so we three went to the cafeteria so I could get something to eat. We had a nice visit and then headed back up to the room to find out that Terry was done and would be coming back to the room soon. The doctor came in and talked with me and told me everything went well. Then the Medtronic tech came in and said all was well and they set up this device exactly like the old one was set up. I was glad for that, as I don't like them messing with stuff that works the way we want it to. LOL Many thanks to Dr. Doyle and his staff for a great experience. We have to go back next week for a followup and we decided to take Phaeton Place. We will take a few days for the trip 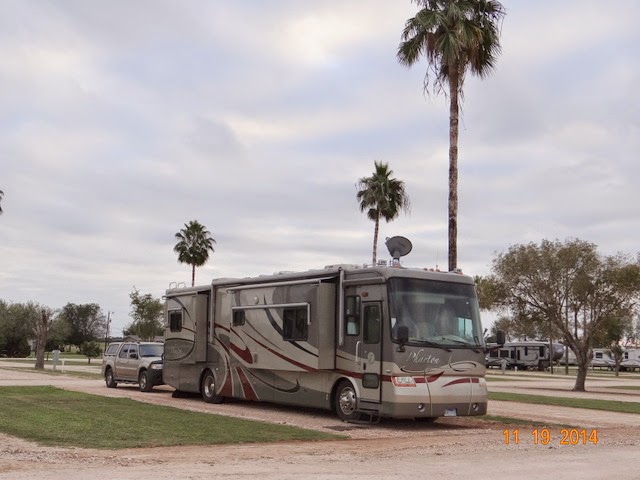 The following day, Wednesday, we left and headed to the valley. Terry was feeling well, took a total of two pain pills (1/2 at a time) and was able to navigate for me. We stopped for the night in Edinburg. We were only about 40 miles away from Mission, but we didn't want to drive in after dark and we wanted to be rested up. So we stopped at Valley Gateway RV park. The hosts were very friendly and the park was not very full, so we got a pull through and didn't have to unhook. We could have, but I didn't want Terry causing any discomfort in his chest.

Thursday morning we drove into our park and got settled. Since we plan to leave Saturday to go back for Terry's checkup, we aren't getting all our "bling" out on our lot. But once we get back and Terry get released, we will be able to get some things done.

One thing I am planning is having Mom and Dad over for Thanksgiving Dinner tomorrow! I had 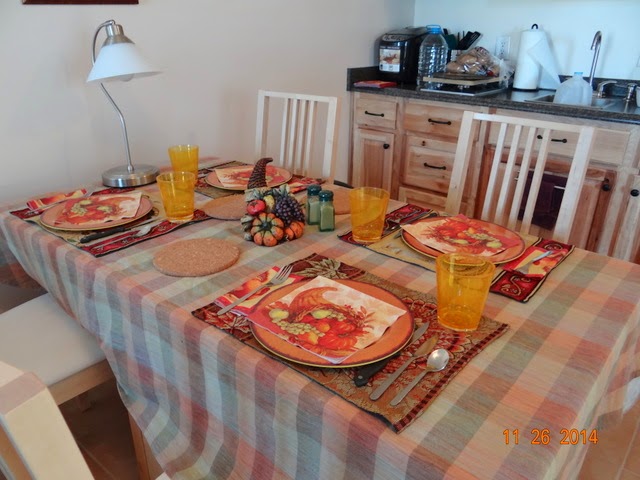 invited them a couple weeks ago. It's hard for Daddy to go over to the hall for dinner and I thought this way he would be in more comfortable surroundings. We are having it in the Texas Room and I have everything ready, I think. I got the turkey and ham ready to roast tomorrow. I made my side dishes and they are in the refrigerator ready to go. I made a Pecan Bar dessert that is done. Tomorrow morning I just have to bake and do the mashed potatoes, which Terry has volunteered to do. So we're good! It's going to be a good day tomorrow! 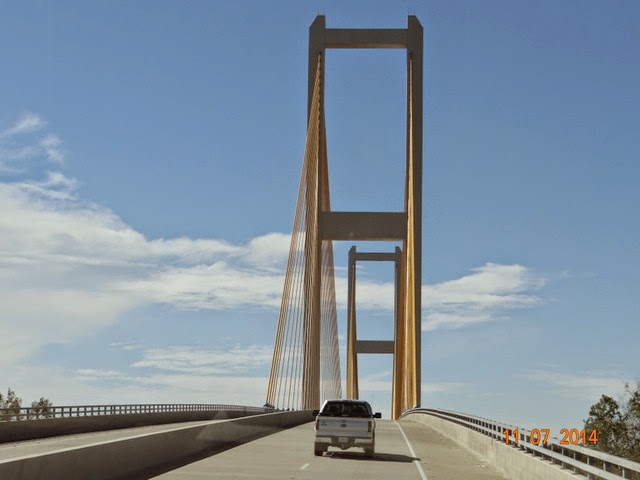 A few weeks ago when we left Zachary, Louisiana, we crossed the new bridge over the Mississippi at St. Francisville. We had been up there when the ferry was running, but had never seen the new bridge. So I've included a picture of that new bridge!