Merry Christmas to all my friends and family. We had a great dinner with Mom and Dad. We entertained them once again in our Texas Room. It really is nice to have a fully functional apartment, even if it is small. But we have an oven and a cooktop and a refrigerator, so we can cook and heat up stuff. And even though the sink is small, 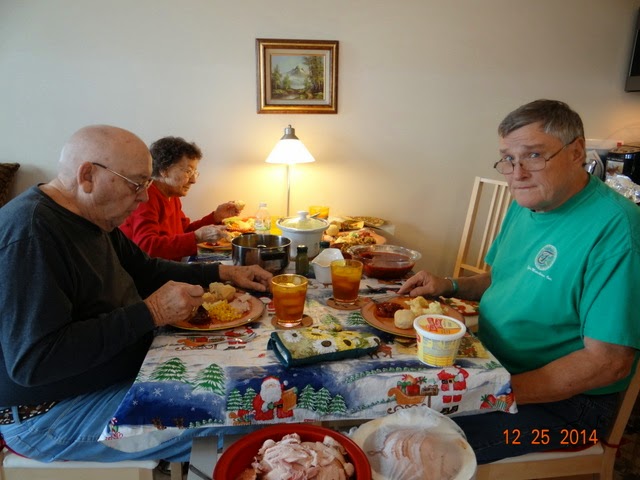 Mom and I manage to do the dishes in it. And Daddy can move from the table to the sofa easily and watch the fire and the television while we clean up. And best of all, there is no hassle with crowds like over at the hall. They jam so many people into the room that you are constantly getting squished by somebody trying to get by you down the row. It's always a good time, but very hard for Daddy. 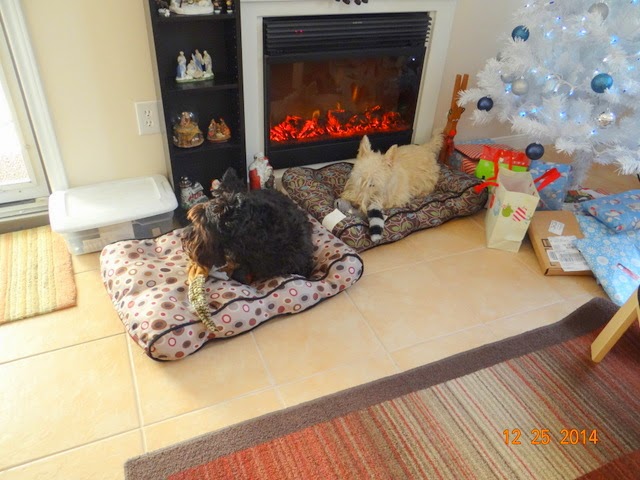 So we opted for a quiet dinner, just the four of us and the girls, who 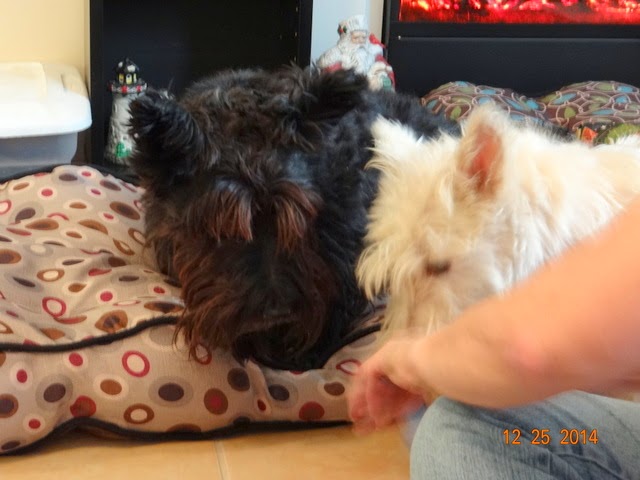 played with their kongs filled with treats! Dad especially liked watching them flip the kongs to get the goodies! 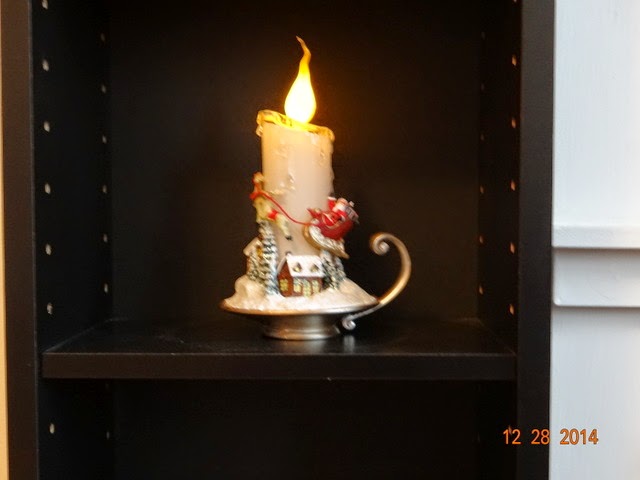 Yesterday, Saturday, was the day for me to take down decorations. I've got a list of stuff I wanted done and I didn't get it all done, but I did get that finished up. Our outside tree lost a string of lights and you can't just remove that string, you have to change the lights. All the lights on the strand were scorched, so Terry replaced every bulb to see if it would work. That did the trick, but we didn't have white lights, only multicolored, so now we have a tree with white lights top and bottom and flashing multicolored in the middle. LOL But it was an experiment to see if it was worth saving and it was. So last evening we braved Walmart and bought lots of lights on sale to replace the multicolored ones. We will wait to do that next year when we take the decorations out, but at least we have a plan. I put everything away except for my new little candle Terry got me for Christmas. I had seen it in the Texas Methodist Hospital gift shop while Terry was having surgery. I really liked it but couldn't bring myself the pay the price. I found it on line a few dollars cheaper and he bought it for me for Christmas. Score!

So the Texas Room is back in order with plenty of space. We will probably do something for New Year's even if it's just us. Mom and Dad have said they aren't celebrating, but they would probably eat some goodies if I took them some. We won't go out anywhere. The girls are doing really well with the fireworks. . . they used to be scared of the noise. . . sometimes even thunderstorms. But over the year they have become accustomed to sounds and they don't seem to be bothered by them anymore. Nonetheless, I don't like leaving them as they no doubt derive comfort from having us in close proximity.

I have been trying to do some crafty things. I made the wreath I posted about last week. I also have

been doing some crocheting and knitting.

I'm not making much yet, but I have been successful nonetheless. I made a two cowls using "arm knitting." It is knitting, but no needles, just your arms. LOL It does work and there are patterns for blankets, etc. They also do "finger knitting." I haven't

tried that yet. I'm trying to do things with my hands because my fingers and joints are becoming arthritic and I want to keep them moving. I also made a ruffled scarf. Don't know if that is the name for it, but here is a picture. This used a wide "mesh" yarn that is really pretty easy to work with. Then I saw some "lace ruffle" scarves at a craft show and the lady told me where to get the stuff. She offered to teach me how to do it, but I found a youtube video that was surprisingly very well done and I made this last night. My big project now is to determine how to change the gauge of the ruffle and made them a little shorter. I'm having fun with it anyway!

Today it is raining and has turned colder. We've had two days of 80's and sun and now are back to 40's-50's and rain for a few days. So it's a good day for inside jobs, like defrosting the refrigerator. I also am going to try and bake myself some gluten free bread. All my last attempts ended in the trash can, so this time I bought some Pamela's bread mix. I haven't been disappointed with any other Pamela's mixes or products, so perhaps this will work. I have everything I need, so I hope this will be successful. I think today would be a good movie day too! Time to watch those couple dozen movies we have hidden away!

The year is almost over. I wish you all peace and a Happy New Year!