We left Plantation in Alabama, and drove all the way to cousin Gary's. We had clear skies this day, but it had rained as hard at Gary's as it did in Alabama. They received eight inches of rain! We were afraid we were not going to be able to set Phaeton Place in his yard, but did get that accomplished. There were areas that were a little mushy and still little ponds of water, but we dodged most of that and were able to find a spot where we didn't sink in.

We spent three days here and we had a really enjoyable time. The first night we were there, Jo announced that she was having a pizza party for some cousins that were in town and many family members were invited. I thought that sounded like fun and I wasn't disappointed. Most of them live close by except for the one and they all were happy to see each other. Other relatives popped in and we got to visit with the extended family a bit. That is always fun.

The next day we all went down to Baton Rouge and to the Cabela's store. We all like going there and it was a lot of fun. Afterwards, we had lunch at the Quaker Steak and Lube, which is right next to the Cabela's store. Gary and Jo had never been to one, so we got to introduce them to it! On the way home we did some other shopping too.

Jo had a couple of commitments this week as it was a festival week for her church, so she baked a couple cakes. While she was busy with that, we hung around with Gary. One day, Jo took me to her crochet class at the Pride library and we had a blast there. There were some very interesting ladies crocheting some very beautiful work. Wish I was that talented. One lady, upon hearing I was from Goshen, Indiana, originally, was all excited. She has traced her family genealogy back to there and there are some Amish in her family. Imagine that. So we talked a bit. 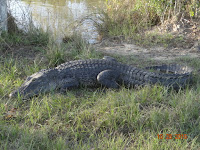 Gary, Terry, and I made our annual pilgrimage to the farm ponds in search of Wally Gator. He didn't disappoint, although he was in a different pond that we had ever seen him in. Gary says he travels 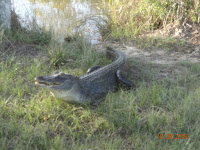 from one pond to the other, but they have never seen him when he was moving. . . he is already moved by the time they find out. He is an interesting animal. Gary drives the golf cart over to the pond and calls "Wally Gator!" He need only call once or twice and you can usually hear a splash. . . then here he comes. . . moving across the top of the water to where Gary is, cutting a wake and he moves. This day he came right up out of the water on the bank and patiently waited while Gary tossed him some chicken scraps. He looks to be about 7 feet long now. He is definitely a juvenile, but I certainly wouldn't want to tangle with him and neither would Gary. We stay in the golf cart and Gary stands back far enough to be able to jump in the cart and to safety. 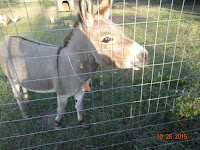 ary and Jo have added to their animal menagerie. They have eight 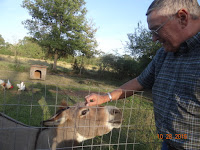 chickens, including two roosters, a little goat, and a miniature burro named Duncan. He is quite the clown and when he "brays" it is loud. I watched him do it and he makes the sound from deep in his gut and his sides expand as he makes his noise. It is comical, but he was such a dear. We loved scratching his ears, and he loved it too.

Before long it was time to leave Gary and Jo's and head for Houston where Terry had a doctor's appointment scheduled for November 2. Hoping to catch up with cousin Jim as well.