Traveling from Florida to Louisiana

We left Brandon's on Friday, October 23, and drove to just east of Tallahassee. We spent the night in a little camp that was . . . adequate. We had to drive down a dirt road for about a quarter mile and we got the truck and the back of the motorhome, including the bicycles, covered in very fine dust. It was really just like talcum powder and we sure did hate to have that mess.

I took a little walk around looking at the different amenities. There were a few, they were old and not very well kept, but we were only spending the night, so no matter. But as I was walking back to our rig, I was looking down and spotted a snake. . .  A SNAKE! Oops. He was about four feet long and at first I thought it must be dead, because it was all stretched out and didn't move. But his head was up off the ground, so I guess that means he's alive, eh? 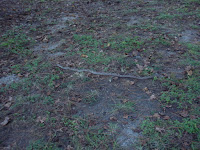 The neighbor was out, so I walked over and told him. I knew the snake wasn't poisonous, and I don't want to kill them. . . I just don't want them near me. The guy came over and looked at it and told me it was an oak snake. I had never heard that, but when I looked it up, I found out he was right. This snake looked just like the picture. They get their name from the camouflage they have. They climb up oak trees and lay on the branches and are barely detectable. The neighbor did try grabbing its tail in an effort to toss it away from his camp, but he only succeeded in making it mad. He didn't try anything else because he didn't want to get bitten. He said even though they aren't poisonous, they can still bite (no fangs) and the wounds can easily get infected from the bacteria in the snake's mouth. So the snake slithered off and we all went back to our camps. Whew, what excitement! 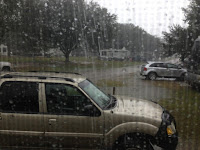 The next day we drove across the panhandle and stopped at Summerdale, Alabama, at the Escapees Camp, Rainbow Plantation. This has always been a favorite stop of ours, but that ended with this stay. They have changed their policy on transient campers and they no longer honor a first in/first out plan which always guaranteed travelers could find a safe haven for the night. They are taking reservations now and the office staff does not really want to 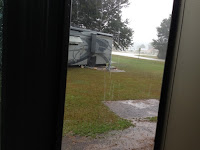 delve too far into the computer pages to find a 50 amp hookup. We were told there were none left, but I got on their site, which had just been updated and found several sites we would take. We finally scored a site we wanted and were able to stay for three days. There was a lot more that happened with this process I won't go into here, but suffice to say, I think we have stayed our last at Rainbow Plantation. I don't like staying in "trailer parks" where people are allowed to add decks and platforms and yard barns to a campsite. If people want to do that, why not just buy a place? We spent a day and a half looking at other campgrounds in the area and found several that will work for us and at about the same price.

While we were there, Hurricane Patricia hit the Pacific coast of Mexico and remnants of it blew through the gulf and over to the panhandle and the area where we were. We got about six inches of rain in a day and a half. We spent most of that time hunkered down in the motorhome with the girls. It rained so hard but we wanted to be ready to take the dogs out if there was a lull. It was a soggy mess, though.

We were ready to leave when the time came and headed out toward Louisiana and Gary and Jo's.