It's been 12 days since Dale's back surgery and all is going well. The pain in the area of the incision is less each day, but still requires medication. She hasn't had the nagging sciatica pain down each leg and doesn't have the hip pain she has had in the past, which is a definite plus. Most mornings she's up by 6:00, which is early for her, but it's time for her meds which is fine. We've been driving about 8 miles every morning to a local mall so she can walk on a smooth surface rather than the gravel of the RV park. She has gotten to 1.2 miles for the morning walk and another .6 miles during our “big” walk with Duchess when the weather permits. On these walks she is using her “hiking poles” to steady her on the gravel in case she trips, which could twist her back. 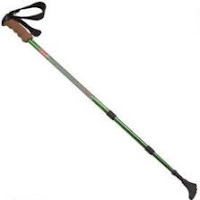 We bought two sets of the poles years ago, have lugged the around in the motorhome seldom used. They sure have come in handy during her recovery. There is no physical therapy for her surgery, other than walking and that is “walk as much as you like and more.” The doctor's office has checked on her several times since her release from the hospital and have complimented her on her walking efforts. The later part of April brings her 1st in office followup visit and our spring doctor's appointments.

We have decided to extend our stay here at the KOA Indy East another month since no other rv parks anywhere close has access to walking areas close by. So we will be here until May 13th and at that time we will head to northern Indiana.