When we left Ortona Lock Campground, we traveled north through Lake Placid to Buttonwood Bay RV Resort between Sebring and Lake Placid. That allowed us to explore the area and check out the campgrounds we were interested in checking out.

Of particular interest was Camp Florida Resort in Lake Placid. We have friends who have bought in here so we wanted to check it out. The sites, however, were small. The camp was well laid out and people seemed really friendly. The camp is divided into circles each with it's own identity. The problem we found was that of the five circles, only two allowed pets and we were told you could walk your pet in your circle and perhaps the common areas, but not in the other circles. Not a bad rule, but then your pets are limited to 20 pounds each. My Scotties were all over 20 pounds. That limits you to the smallish dogs and many of those are problematic, but since they are small, people accept that they cannot do much damage. And we could not allow our granddogs to visit because they are both over 20 pounds. And we couldn't park all our stuff there. We liked the location and the amenities, but decided it wouldn't work for us.


looked at other possibilities in the area and out around Lake Istokpoga, east of Sebring, but that was a washout. A sad note, however, while driving around the lake we saw a dead black bear on the side of the road. From the size, it looked like an adult, and a recent incident as scavengers had not yet descended upon it. 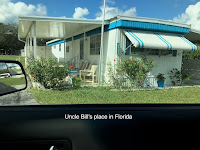 We did some exploring around Sebring. We owned a condo here and went by to see what it looks like now. It is still in very good condition, but the community has need of some upgrading. Some of the homes needed work. Terry's parents lived here for many winters, but it wasn't a place we were interested in. We never lived there other than to visit the folks at Christmas time. We also checked out Uncle Bill's home where he and Aunt Francis lived in the winters and also Uncle Dan's place. It was a trip down memory lane! 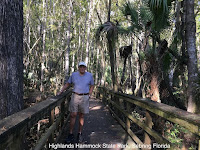 We also drove out to the Highlands Hammock state park west of Sebring. It is exactly as we remembered it although there have been a few controlled burns in the hammock leading up to the park. They do that to help save the environment in the event of a wild fire. We also visited the museum on the grounds. It is a history lesson on the CCC, the Civilian Conservation Corp and how parks like this one were built by individuals being put to work by the government in order to turn the tide of the Great Depression. The workers were paid a wage but much of it was returned to their families. They were given enough to spend, but all their needs were met while they were working on the various projects the government had created. An interesting time.

Buttonwood Bay was a very nice park. We were able to wash the motorhome and the car while we were there. Most parks do not allow that. And we were on a double concrete site, so we parked everything on pavement. They accept Passport American which means we camped for half price! Score! Very nice. The neighbors were friendly and we chatted a bit. The park is on a lake, Lake Josephine, which was very pretty and they had a nature trail/walking path along the canal going into the lake. We were able to walk a different route here every day. Every park here has sand hill cranes that hang around. Not sure why they like the parks, but they do. They aren't skittish, but I would imagine if they feel threatened, they could chase you away!

From Sebring we drove on up to Zephyrhills to check out some other parks.