Once we left Brandon's, we traveled south down around Lake Okeechobee to see what RV lots and property might be available. We passed by the lake and traveled on west to the Otorna Lock and Campground on the waterway that runs from Fort Myers to the lake and on through. It has a system of locks which make it possible for boats and barges to traverse the state. We were camped at Ortona Lock which is a COE camp.

What a gem! This campground is immaculate and we scored a site right on the canal! The lock is open from 7:30 to 4:30 daily and all manor of boats and ships travel through the locks in both directions headed for their day's adventures. They take the annual parks pass so we camped for $17 a night! Whoo hoo! Water and electric only, but a great place. 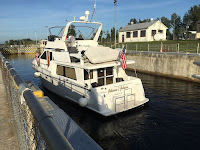 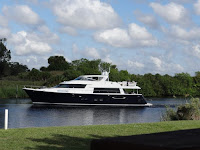 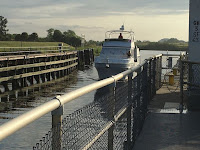 We got up to walk in the morning which we have finally been able to do again. Terry is starting to feel a lot better and started walking while we were in Melbourne. We walked over to the lock and watched some boats come in from the lake side. We talked with the one couple. They winter down here from Wisconsin, but instead of an RV or a trailer, etc., they live aboard their 52' yacht! How cool is that. I would LOVE to do that. They had just arrived in the state the day before, got aboard and were now headed to Fort Myers. They were a very nice couple and we enjoyed chatting with them. I think over 90% of the traffic through the locks is made up of pleasure boats and we didn't see any barges or anything. . . only pleasure boats. . . but what an array!

We also had a resident EAGLE who spent time in a dead tree opposite our site on the canal. He was really beautiful and could be seen there most days. The campground host also told us we could see feral hogs in the fields to the east of our campsite, but we never saw any. Would like to have seen some, but I know to stay away from them. I only looked from the safety of the motorhome! Also, to get to our site, we had to cross a bridge over a small creek and there were so many birds down in the creek all the time fishing and digging around for morsels to eat. We saw what I thought must be a muskrat, but was told later it was an otter! Whoo hoo!

We did some exploring around the area and visited a couple campgrounds, but nothing intrigued us. The place we are looking for must have enough space to put all our stuff. We will probably downsize from two motorhomes and get rid of our cargo trailer, but not yet, so it will have to be a special place.

One exciting event happened while we were exploring the lake around the Clewiston area. We had driven out of town and turned around to come back. It was four-lane divided but as we approached the town, movement on the side of the road caught my eye. Terry didn't see it, so I did a U-turn and went back to look again. As we approached the spot, DOZENS of black iguanas came up from the ditch on the right side of the road, heading for the pavement. They weren't close enough to get hit, but we could see them very clearly. I mean DOZENS of them. This was right out of a scene from Jurassic Park! And then we saw it! This was a green iguana, but was orange in color and was HUGE. He would have given any one of my Scottish Terriers a run for their money. As we passed by, he turned back toward the ditch and we got a really good look at him. This must be a frequent occurrence because there are signs all over not to stop on the road or the berm. So taking pictures was out. It is a heavily traveled road and taking pictures on the fly just wouldn't cut it. So we had to be content with our memory! What a sight, though. Later I did some reading up on these creatures. Unfortunately they are an invasive species, not native to the area, and wreak havoc on the environment. They have no natural predators and create problems. So it is open season on them, you can kill any on your property, no permit needed. If you have them and don't want to kill them, you can call someone who will. Kind of sad really. They just want to live. And the reason they are moving right now is because it is mating season! It was an interesting encounter for sure! 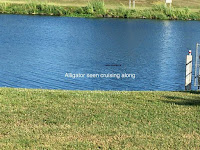 Before we left, we saw an alligator cruising down the canal. He wasn't real big, but he was there, nonetheless. They say anywhere in Florida you find water, you can find a gator. LOL After a few nights, we traveled on up to Lake Placid to explore some parks we know are there. Wish us luck!