Leaving the RGV is always bittersweet. We left Mom and Dad after sitting behind them all winter, but they have guests arriving in a few days, so they won't be alone. Her brother and his wife are going to be arriving in another week or so and then after they leave, my sister and her husband will be flying in and getting ready for the big drive home. 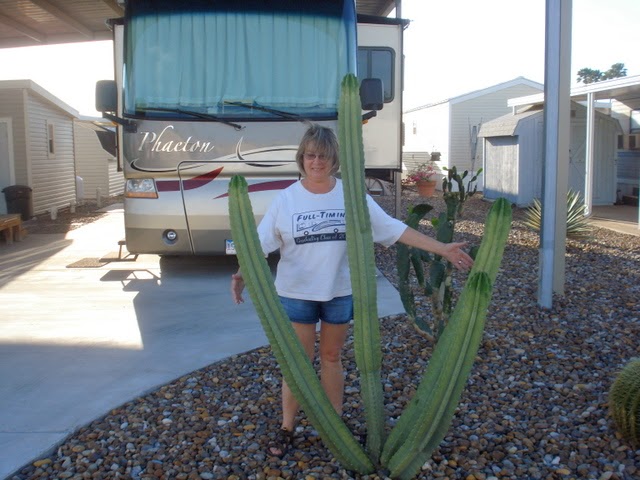 I took pictures of what my cactus looked like when we left. They 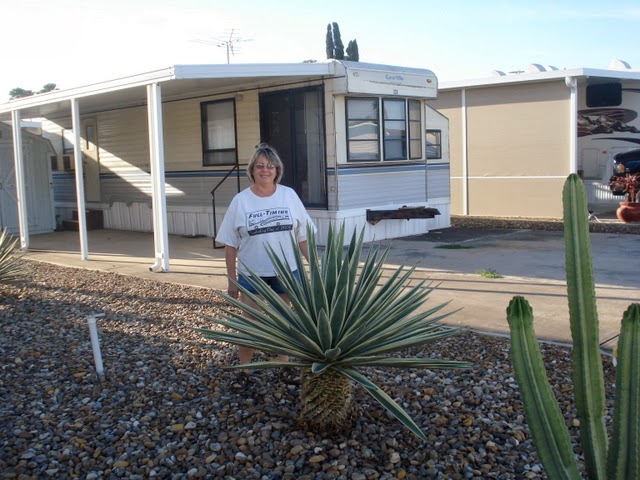 don't grow much in the winter. One would think with all the rain, they would grow quickly, but they wait and grow best in the scorching heat of the summer. Go 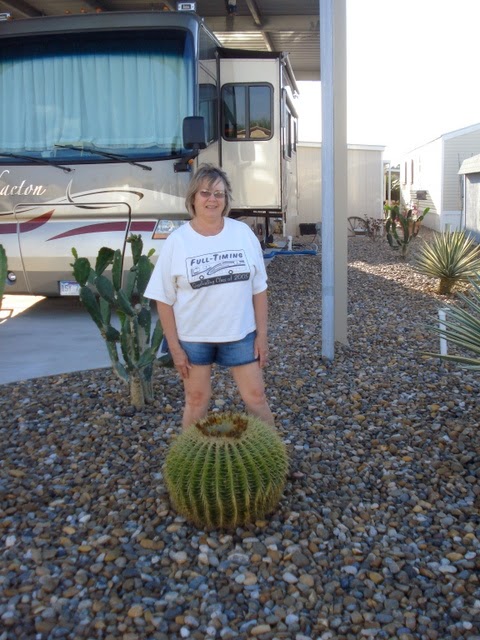 figure. The flat paddle cactus have been trimmed greatly. We are trying to get them to grow up "tree-like."

We had planned on leaving Sunday, today, but decided to skip out a day early. We are anxious to see my cousins in Houston and arriving there earlier in the day would be a big plus. It is a 7 hour journey in the motorhome and unless you leave at the crack of dawn, arriving early afternoon is not gonna happen. We had planned to stop at a park in Sinton, but we drove in and it wasn't "as advertised," and we decided to move on down the road. So we stopped at our regular stop in Victoria, Gateway to the Gulf RV Park. This is a nice park, but we weren't able to snag one of the pull throughs, so we had to unhook the toad. No problem, and while we were unhooked, decided to run into town to Mumphford's Place BBQ once again for a great dinner.

While we were driving through Kingsville, we saw some really outrageous traffic. Really, I didn't know there were that many cars in that part of Texas. Fortunately they were all getting off the expressway and heading east, so it didn't create a bottleneck for us, but there were miles of cars waiting to exit down the ramp. We had no idea what the attraction was until it appeared we were going to get strafed by. . . MIGS! Yes, MIGS! I said, "What kind of plane is that anyway, Terry?" He looked up and said, "It's a MIG!" Wow. It WAS A MIG! We knew then it must be an airshow and the cars were all headed to the airport. I looked it up and it is the "Wings Over South Texas" airshow this weekend at Kingsville. And they mention on their website the Migs they have in the show. We saw two flying over us. That way quite a thrill, but it was too late to get any kind of picture.

Our drive was easy and uneventful. . . the best kind. For once, all our monitors worked without error. Terry's new Silverleaf diagnostic program was flawless. We had trouble with it before and at one point it even caused a "check engine light" to come one. That seemed to be remedied with the physically installation of the software that came with it. . . duh. . . found when Terry was putting it back in the box. LOL Since the install, it runs perfectly. The new TPMS, tire pressure monitoring system, a series of 10 sensors on all the motorhome and truck tires worked perfectly for the first time. Out of 10 sensors, one was bad out of the box. The company replaced it and now all 10 are working. Man, I love it when a plan comes together.

We are spending 2 nights in Houston starting tonight and visiting with Jim and Pat, then on to Nacogdoches, Texas. We are going to Foretravel and look at their coaches. Just browsing, but who knows. . . ????? Then we are off to Henderson to visit with friends we met while we were in Houston for Terry's cancer treatment. It's been awhile since we've seen them. Our trips back to Houston never seemed to coincide, but we like to touch base now and then.

From there we will cut across country to Virginia to see our grandones. We will be arriving between their birthdays, so it will be a double celebration! So anxious to see them. They change so quickly when they are that little. Course, we come bearing gifts, so that should endear us to them.

I hope we don't hit any bad weather on our travels. It was a miserable winter as winters go in the valley, but much, much worse in other parts of the country, so we try not to complain. Last year we had a snowstorm while we were camped in Richmond, Virginia, and hoping that doesn't happen again.

The girls are doing well and enjoy getting out and sniffing new territory daily. If they are confused, 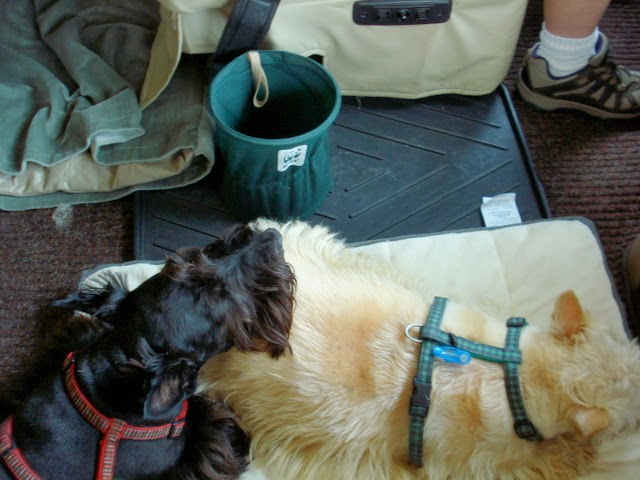 they don't show it. They did love having Grandma and Grandpa around. Yesterday they took care of the girls while we were getting Phaeton Place ready to roll. They certainly don't lack for attention. It's hard to tell from the picture, but Duchess has her head resting on Butterscotch. LOL

Today starts as a lazy day. We are further toward Houston than we had planned with a fairly short drive today, so don't need to be in a hurry.

All you snowbirds and fulltimers out there hitting the road, be safe and take care on the roads.