Regretfully, I had not posted while we were gone. I was more engrossed in worry about the motorhome and not really wanting to write much. So I will be adding pictures once I am finished with the text and upload all my pictures.

When we left Jellystone in Sioux Falls, we had all the warnings bells and whistles doing their thing. The camp is right on I-80 and there are no frontage roads, so we had to get on the interstate. The lights would go out, then on, then out. We were now experiencing a derate in the engine which puts it in limp mode, so I am struggling along at 40 mph while traffic is whizzing past me at 80. The problems didn't last long. At about the two mile mark, the engine was up to 130 degrees, all the lights went out and we were soon rolling along at my 67 mph speed I seem to like. No problems the rest of the day. We stopped for lunch and continued on. The engine is still warm when we take these breaks, so we don't have anymore problems with it like when we start out with a cold engine.

At this point, I asked Terry how far it was to Goshen because I was to the point that I just wanted to get someplace familiar and safe and then find someone "ELSE" who could work on the motorhome. Can't trust Hill's in South Bend to do the work. They have left us with more problems than we started with. But it was way too far to drive in one day, so we stopped in Tama, Iowa, at an Indian casino for the night. This was a good stop. The lovely campground with 50 Amp electric was $20 a night. They had very nice restrooms and showers. So we took advantage of that. Nice and clean and big. They were actually three-piece bathrooms. There was a nice laundry area, but I was good there. We went into the casino and spent a little time and a little money, the emphasis on "little." Once again, we broke even, maybe a little to the good side.

When we left the next morning, our departure was delayed by storms. We had been watching storms all along the way and had been successful at skirting or avoiding them all together. We had a storm 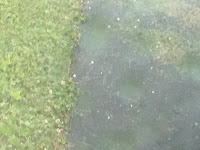 roll in just as we got everything ready to go, slides in, jacks up, awnings up, etc. Good thing, because we had some serious wind and HAIL! An RV'ers nightmare. It was about the size of mothballs, so we didn't have any damage. Whew! It was rather LOUD, though. We did have a safe place to go if need be, but we stayed in the motorhome and were fine.

We started out with the same problems as usual until we were up to that magic 130 degrees engine temperature, then we rolled. And roll we did for 450 miles till we pulled in to Elkhart Campground about 6:30 in the evening. It never looked so good. So we had traveled almost 3,000 miles with warnings lights and buzzers to make it back here safe and sound. Obviously, there isn't much wrong but it sure would be nice to find someone who KNOWS WHAT THEY'RE DOING and can fix it!