Time flies when you're having fun, right? So it must be doing the slow crawl for us. Motorhome problems continue to plague us and we are about at our wits' end.

On the way to Piney Grove, we stopped at our favorite rest area on the north side of the bridge over the Tennessee River on the Natchez Trace. This was just the day after picking the coach up again 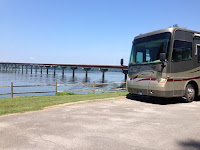 from Hill's Truck Service Center in South Bend, Indiana. We noticed after stopping and walking the dogs that we had what appeared to be a leak under the driver's area. Yep, it's a NEW fuel leak. It's not the one that continues to spew fumes into the basement and coach. . . this is a NEW leak created by the "mechanics" at Hill's. We never had any VISIBLE leak until they "fixed" it. Grrrrrr. Well, that still wouldn't keep us from moving so on we went. As soon as we pulled out of the rest area and approached the incline on the bridge the "Check Engine Light" came on. It continued and flashed "Low Coolant" before going out. Hmmmmm. Thanks, Hill's for checking and topping off the coolant. We thought we had finally found a place where we could take the rig up in northern Indiana for service and now are having to rethink that. We have had this before and normally have to add a bit of coolant. Terry runs the Silverleaf Diagnostic System on his laptop and it showed the engine temperature perfect, so we didn't worry about that. We drove on without incident and got into the camp expecting Gary and Jo to be already parked and waiting for us, since we were a day late.

Sad to say, Gary and Jo had cancelled their reservations and were staying at Shirley's. That's not a bad thing. Staying at his sister's is the best place for them since they don't see each other that often. We still got our favorite site and the camp was full. The neighbors camping in "Gary's" site came over and introduced themselves and invited us to share their screen tent and play cards and games. We thanked them. . . southern hospitality at its best. But after the problems we had getting here, we stuck to our site, walked the dogs and relaxed.

We had recently received information from the tax gurus in Texas that they were upping our assessment and taxes on our Texas property and so we filed an appeal. Unfortunately, instead of just making an adjustment, they scheduled a hearing for us. If we were not going to make the hearing, which at this point was 10 days away, we would have to hire a representative (too late to do that) or submit all our data and have it notarized, etc. So I spent the morning preparing the necessary forms and supporting materials. Terry called his cousin Cathy and she has a cousin on the other side of the family who works at a bank and is a notary public. So we went to visit Cathy and her husband Bill and then she drove us to downtown Baldwyn where we met her cousin and she notarized our paperwork. After that we were able to drop it in the mail. Whew. That's done. It required eight copies of everything so that each person on the appeals board could have their own documents. It probably won't even make a difference, but I had to try. Since then, we have talked with other owners in our park and were told of a lawyer who is helping a lot of the winter Texans there; so we will touch base with that attorney this year so that in future years, we will have someone who can help us by remote.

We had a great visit with Cathy and Bill in their "new" house. Her Dad, Uncle Bob, is the last Pace member of his generation. He is Terry's Dad's brother. He is in assisted living and suffers from Alzheimer's. When he moved out, Cathy and Bill moved into his house and have redecorated it. It is lovely and is a beautiful home. They are becoming more comfortable in it I think.

We drove over to Red Bay, always a highlight of our trips to Mississippi. We bought a few things in the camp store. We should have looked around more, because they have built a new customer lounge and we didn't even know it until after we left. But we do go every year, so we will manage to see it next time.

Saturday we attended the family reunion in Marietta, Mississippi. It was a bit of a disappointment. Uncle Bob was not feeling well, so he didn't come. We had a total of 18 I think. The restaurant venue was actually quite good. The food was good and the family was great. We had hoped by having it at a restaurant and not requiring anyone to cook, there would be a bigger attendance. I hope that more attend next year and in the years to come because we always enjoy seeing everyone. So many have moved away that it is good to touch base with them once a year at least. Terry thinks we could send out invitations and I think that would be a good idea. As the family gets older, it is important for the younger ones to take interest in seeing that we make that contact at least every year.

After the reunion, we went back to camp and spent some time with the dogs and walked them. We headed back to Wheeler later and spent the evening visiting with cousin Shirley and family and cousin Gary and wife Jo. We had a great time visiting. It is always fun to visit with these cousins. Terry has fond memories of spending time in Mississippi when he was little. They always came back for vacations and family events, so he was quite close with these cousins and they remain very special to him.

So, tomorrow will be time to head out. Our plans are to head to Sioux Falls, South Dakota, as our drivers' licenses need to be renewed.