When we left Jocelyn and Tom's on Monday, we drove to Chesapeake, Virginia. Tom's parents, Tom and Sharon, live there and have been wanting us to come visit. We never visited them when they lived in Pennsylvania or New Jersey, but now that they moved closer to the kids, we thought we would make the trip to see them.

We certainly regretted the route we took, which was mainly 460. It is 4 lane in most places, but the lanes are very narrow and the roads are quite pockmarked. It made for a long, stressful drive, but we made it down there by 2:00 p.m. and got set up. We camped at Chesapeake Campground, which is not all that nice. It is certainly great for the location, but that's where the good stops. A lot of permanents and the sites are narrow and close together. We drove over to Tom and Sharon's which is about 5 miles away and Tom made us dinner. We sat and visited for quite some time. Dinner was delicious and afterwards, we went to Dairy Queen for dessert. Whoo hoo! It doesn't get much better than this! Tom and Sharon moved a year ago to Chesapeake after retirement and bought their retirement home. It is in a condo subdivision and is a beautiful home. They have enough room for the kids when they come visit and even have a playroom for them upstairs.

On Tuesday, we went to Norfolk and did the "river tour" through the harbor where the Navy ships are brought in for repairs, upgrading, servicing, etc. It was a wonderful tour. It was raining the entire time, but the boat we were on was enclosed on the lower deck and we could see pretty well. The rain was not super hard, but it did make for some fog in the distance, but it was still an experience just to see these giant behemoths sitting at the piers. Our captain/narrator did a great job of educating us on the harbor, the different ships and their statistics. I could see him part of the time and he appeared to be talking from memory and not reading from a document. He was very informative and made the trip very enjoyable.

I took a lot of pictures because I wanted to share them with my Dad who is a Navy veteran. The ships now all look so much different than when he was in during WWII, but he will enjoy looking at them. The naval museum call the Nauticus has a WWII era ship, the Wisconsin, 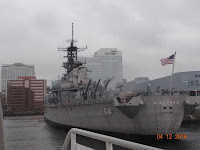 which is part of the museum. It sits right next to the building. We did not go there this trip, but decided to go another time when the weather was clear.

We saw the hospital ship Comfort, which has 1,000 beds. Sharon 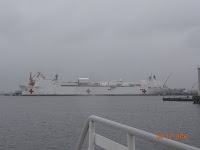 said that is amazing. She is a nurse and said most hospitals only have 3-500 beds. 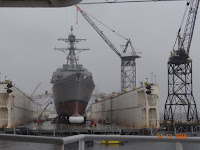 One ship was sitting in dry dock and that was amazing to hear how that is accomplished. The crane being used to work on it had a BAE Systems logo on it which is the company our son Brandon worked for at one time. 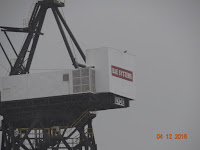 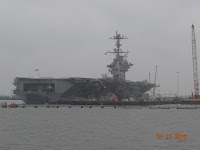 We saw the aircraft carrier George Washington which is a Nimitz class carrier. These ships are huge and there happened to be one F-18 Hornet on its deck. My cousin's son Jason is an F-18 pilot and 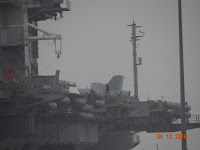 was stationed here at one time. He is currently in California. 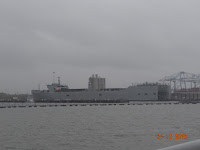 One ship is designed to be flooded so that  tanks, boats, and personnel can walk/drive off the ship without getting wet. The technology is amazing. 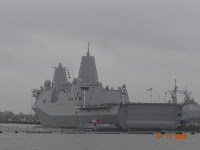 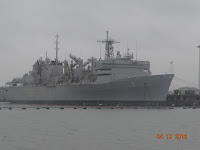 Thanks to Tom and Sharon for helping with the entertainment! Afterwards, we walked to "Hell's Kitchen" to have some lunch. Another great meal and great company. I would call it a "goth experience." LOL    We laughed about how Jocelyn and Tom would love the place!

Later after we had returned to the motorhome and fed and walked the dogs, we were able to rest a bit. Then we returned to Tom and Sharon's and went out to dinner. We went to the Courthouse Cafe where I had prime rib and it was delicious. It was a larger cut than I normally get and so I brought half of my dinner home so I can enjoy it today for lunch! I love it when a plan comes together.

We left Chesapeake with promises to come back again and traveled through Virginia, stopping at Appomattox for two nights. Terry is a Civil War buff and is actually a Mississippi native. The area where he was born is in the heart of many battles and occupations, not too far from Shiloh. So we have always spent time visiting those sites over the years. We plan to do some sightseeing while we are here.