This summer we learned (about the same time that Daddy died) that our daughter-in-law's father had been diagnosed with lung cancer. The stage and the fact that it had already spread did not bode well for Percy. While we are here in Mobile we received word that he had passed away.

While we were there in Melbourne, we were able to see him. He was obviously thinner, but we were surprised he took such a bad turn and died just a week later. We were all at the pumpkin patch to help Brynlee pick out her pumpkin. 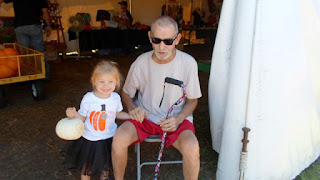 Please keep Megan and her brother and mother in your prayers as they transition life without their patriarch.