We arrived Tuesday, the 10th, at the Goshen fairgrounds for Glamarama. This is an FMCA (Family Motor Coach Association) rally hosted by the Great Lakes area chapters. While we do not belong to a chapter, we are FMCA members, so we can attend any of their rallies. We try to attend any rally that comes to the fairgrounds because it's a great venue and we are close to the apartments in the event we have something urgent we need to take care of.

We got in around noon and got parked. Thankfully we were not parked in the infield of the track this time like we were at Escapade. We parked right in front of the horse arena which makes for easy access to everything. We are on grass, but the road in front of us is paved, so we have a good spot. 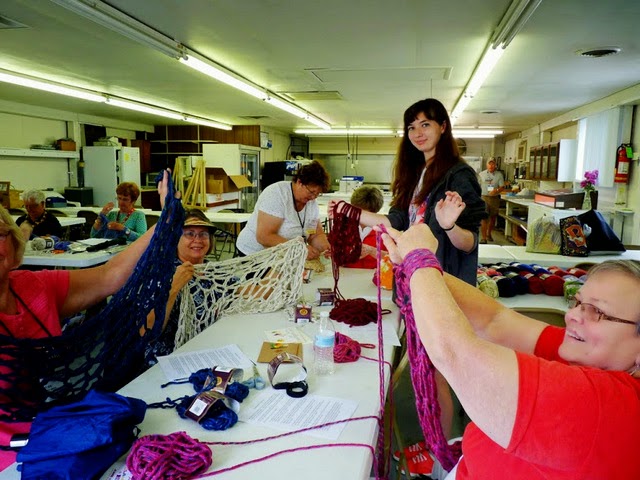 We spent the week attending seminars, learning new things hopefully that we can use in our fulltiming lifestyle. We weren't disappointed. There were more seminars in which we were interested than we were able to attend. We only attended a couple together, we usually went our separate ways. I attended two craft

classes. One was on "arm knitting." Instead of needles, you knit with your arms. I know that sounds totally weird, and it was, but I made a cowl and it is pretty cool. It was a very simple craft and one we could start and finish in the time allotted. I have never knitted either, so even if you are "knit challenged" as I, you could do it. The instructor said she learned it off "you tube," so if you are curious, plug in "arm knitting" on you tube's site and you will find it. I also did a class on needle tatting. Okay. Suffice to say that one did not go so well. It is very tedious and I wasn't really into the finished product. I really had thought it would be tatting as in lace making using a shuttle, but the instructor assured us this was much easier. Hmmmmm. I didn't find it easy and I would rather work on learning my crocheting better. But it was an interesting class and the instructor was good. . . just not my cup of tea.

We looked at the coaches on display. I really don't know where they are getting their ideas for floor plans. . . or I should say lack of ideas. I didn't find anything I liked better than Phaeton Place and we really didn't pick Phaeton Place for the floor plan. There were some smaller RV's and they were interesting. Still nothing I would trade MinnieMee for. In MinnieMee we have to make up the bed every night which is a pain, but her big advantage is a bathroom big enough to change clothes in. Most of the bathrooms in the little ones were so small you couldn't turn around in them. If you wanted to face the other way you had to back out of the bath, turn and go back in. Hah! No thank you.

The entertainment at the rally was superb. The first night it was "New Odyssey." They are otherwise known as "3 guys, 30 instruments." If you put that in the search engine on the internet, you will find them. They really do play 30 instruments and they are exceptional talents. The drummer even donned a suit jacket at one point which had electronics embedded in it. By slapping his hands on various points on the jacket, he played the drums. Cool. He even had them in his shoes, so he was jumping around to make the beat.

Another night we had two musicians, one played guitar and the other harmonica. I have never heard such a good harmonica player. Anyone who can play the William Tell Overture (fast) on the harmonica commands respect.

Last evening we heard "The Redhead Express." These are four sisters who play guitar, banjo, bass, fiddle and mandolin. . . and sing. They were very good. They are from Alaska, but live now in Nashville, trying to break into the music scene. I know they perform in the  Rio Grande Valley in the winter. I have often wanted to go hear them and now I may do that. They have three brothers and their parents who also perform a couple songs with them. Such a talented family. It's just not fair. I can't play one thing well, and these people all play multiple instruments and play them well. Not fair.

We paid for an extra night here at the fairgrounds so we wouldn't have to leave today. We wanted to drive down to Claypool and take Mom and Dad out for Father's Day dinner. Jim, Nita, and Kellie joined us, so we had a very nice dinner. Afterwards we visited with Mom and Dad a bit, then came back up to the fairgrounds. Tomorrow we will try to finish up work on the one vacant apartment and get it ready.

There is a children's horse camp that started today here at the fairgrounds. It actually didn't start till late afternoon, but horse trailers have been coming in all day. They are saddled up and working in the horse arena right behind us. We took the girls out for a walk and they seemed a little bewildered at all the activity going on, but they were good. They growled a little at horses going by, but a quick word from me and they stop. They listen so well.