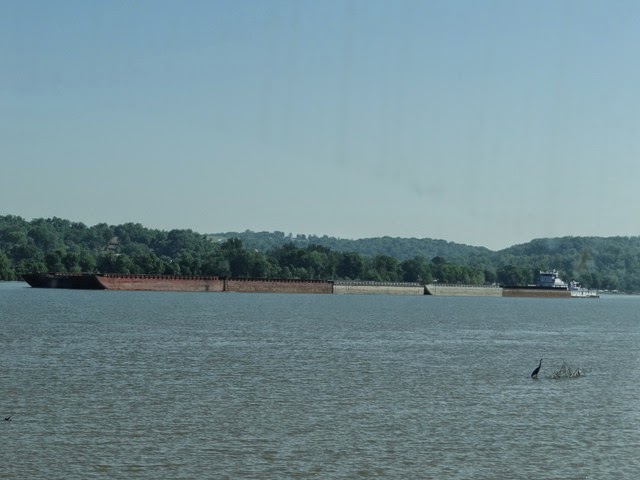 We spent Saturday sightseeing around the area. We had thought there was a lot to see, but it was more quaint and sparse, which was okay. We enjoyed watching the river traffic. . . lots of barges going up and down river. Just down from us was the Markland Dam and the locks. We saw a lot of boats hooking up and floating downstream. There was one group of NINE large cruisers and houseboats together. When they would drift down closer to the dam, they would then all power up and move as a group on up river. Once it got dark, they turned on their lights. Not sure where they ended up, but we didn't see them at all this morning.

The restaurant here at Smuggler's Cove does a big business. Their evenings are really hopping and they have both inside and outside seating. It may have been noisy closer to the building, but we weren't bothered by any noise where we were at. We had our A/C and fans running and that pretty much eliminates the noise.

front of our site. At one point one caught a pretty good sized fish and enjoyed his dinner while we watched.

They just swallow them, which is pretty amazing considering their very slendar necks.

We drove across the river to the town of Florence, which really isn't a town. They have a post office and that's it. There are some homes and some RV lots along the river. That is where Chris from Mooreland has his place. We drove back west to the town of Vevay, Indiana, and found a car 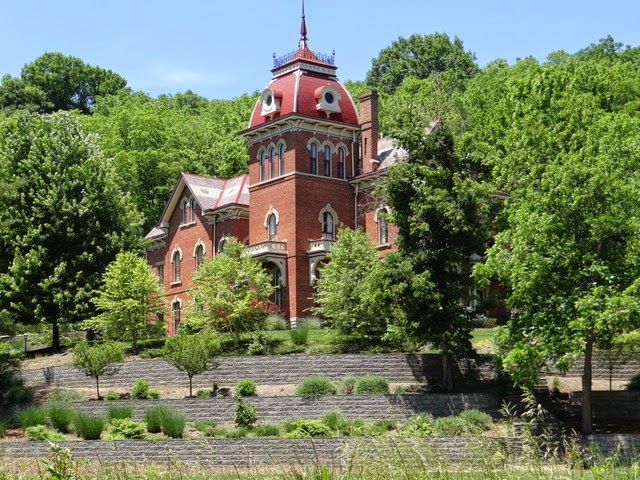 wash to clean the car. We stopped for a couple things at Dollar General, then drove around the town. We found this beautiful old house, the Schenck house, which is now a Bed and Breakfast. Very nice.

Today we broke camp and
drove on west to I-65 and are stopped for the night at Singing Hills Camp near Cave City, Kentucky. We've been here before and it's a nice stopover.