No good intention goes unpunished. We were gathering things together to get the motorhome repacked. Whenever we stay over at the condo, we end up pilfering food/clothes out of the motorhome, so then we have to put everything back in. It is the one thing I hate about being here, but we have had a lot of service work done on Phaeton Place this summer and it was nice to have a place to stay. She's getting close to 100,000 miles and we had those services all done on her. Also had the tires rotated, a front end alignment and new front shocks. We had to take her to four different places to get that work all done, so that was hectic.

As we were getting ready to take off for a couple weeks, we got out our auxiliary brake that helps to stop the little truck we tow and it wouldn't work. Talk about frustration. . . every year we have had to send in this device and Terry was quite upset when he called them and talked to customer service. He found out how much it was going to cost and then called the manager for customer service and explained why he was so unhappy. After they talked, she gave him an RMA number and said they would be taking care of it completely. She sent him a mailing label via email. So we did get it sent in the next day. But that meant we were stuck sitting until that was fixed and arrived back to us. And of course, they got it fixed the next day, but sent it to our mail service in South Dakota instead of reading the paper Terry included about NOT shipping it there and calling for a shipping address.

It finally arrived on Thursday and we left that same day. Fortunately it worked right out of the box and has performed perfectly since. Hope that continues. We spent Thursday and Friday nights in Angola, Indiana. . .not too far away, but far enough to feel like we had gone somewhere! We are headed to Petosky, Michigan. We aren't sure what we are going to do there, but we have a campsite in the city park on the water, so maybe we will just sit and watch all the activity. We are supposed to be close enough to walk to town, so will probably do that. We will stay for a few days, then it's back south to attend a wedding near Kalamazoo. After that, we will spend a month at Elkhart Campground before heading south to the fall doctor appointments. 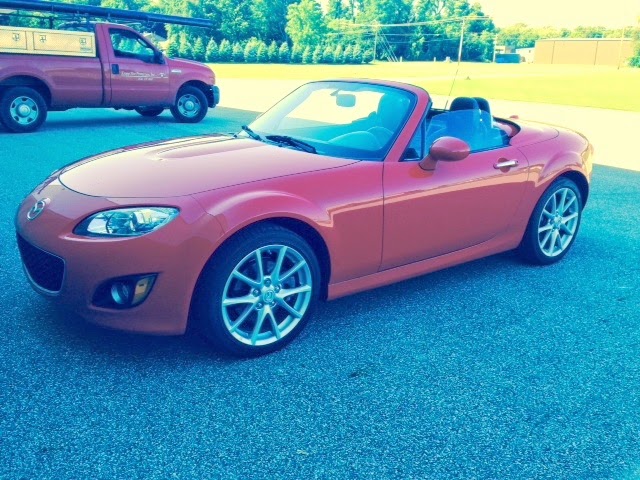 was following on the internet. He called a dealer to see if it was still available. It was, so we got MinnieMee out of storage so we could take the dogs with us and headed for Lansing, Michigan. We ended up buying it and I got to drive it home. It's a fun car to drive and we love it. It's a 2011 Mazda Miata MX-5.