We were in Warsaw for a few days visiting with Mom and yesterday we took her out for the day. We started by visiting the cemetery to see Daddy's grave. We took off the wilted flowers left from the spray we had placed on his casket.

We continued on, stopping at one Amish scratch and dent store and then went over to the house in Goshen. Mom hadn't been there for some time. We dropped off the dogs there and then drove over to the Elkhart Campground. We had to leave our spot there last week because a large rally was coming in. It was "Vintage Trailers" and we wanted to go and see the old rigs. Some had come in before we left and we thought it would be fun to drive around and look at them. I thought Mom might enjoy it and she did. Mom and Dad camped from the time I was in junior high and were in a camping club. They really took camping to the next level and it was fun to see trailers similar to ones she and Dad had owned.

Here are some pictures of some of the "oldie but goodies." 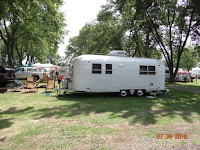 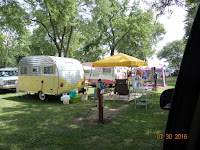 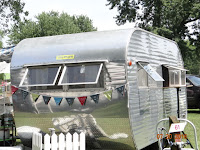 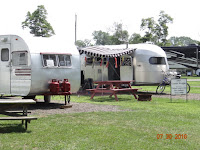 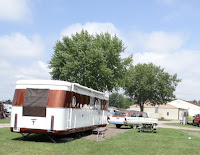 There were over 100 of the old rigs. It was quite a sight. They were having "yard" sales while we were there. They all had color themes and they had color coordinated awnings, trim, table covers, and dinnerware. It was clear they were having a lot of fun. We met two women who were on their own and had bought old trailers and joined the club. They enjoyed having people to camp with and enjoyed the camaraderie. It was certainly a fun atmosphere.

Mom seemed to enjoy herself and after we left, we headed back over to the house. We picked up the dogs and headed back to Claypool. I think she was tired, but she said she enjoyed the day. Mission accomplished.