When I last wrote, we were at the rally and were suffering through a multitude of problems with Phaeton Place. I guess she didn't like sitting in storage for four months while we were in MinnieMee. As it turned out, the problems I wrote about were not the ONLY ones we were going to have. Later that same evening after sorting out the water leak, etc., we discovered our toilet was leaking as well! Fortunately for all, it was clean water, but parts were not available locally. Grrrr. RV Capital of the World and not really a good RV parts store in town. Whouldda' thunk? So Terry got on line and ordered everything he could and we made a trip over to Factory RV Surplus where they also didn't have the last part he needed, but offered to order it.

So now all is fixed. The solenoid was installed before we left the rally, the toilet parts and the sink faucet all arrived the same day, so Terry got all that stuff done. I don't know what we would do if he couldn't fix this stuff himself. . .  well, yeah I do. We'd be paying someone to do it. We did luck out (sort of) on the faucet. Terry called the manufacturer, Price Pfister, who told him the faucet had a life-time warranty and they would send one out. Which they did, but all the hoses, etc., that they sent with it were too short for the application, so we had to run to the hardware store. Still, a better deal for us.

Wednesday of the rally, we got up early and drove to Indy for Terry's cardiology appointments. We left the girls at the house and our manager and his wife let them out two times. They were thrilled to help out with them. They really like dogs and they even invited a friend over to see them. Terry's appointments went very well and he continues to amaze the doctors. His ICD is working well and we verified the one instance where he knew it was about to shock him, but didn't. It's always preferable for the device to pace your heart out of a bad rhythm.

Last week we went to central Indiana for our regular doctor appointments and that all went well, too. 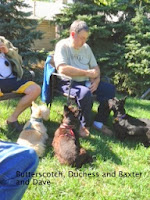 We even had a "meet and greet" for our dogs and our regular vet so they now have them in their system. I bought more of the heartworm meds they have been on, so I don't have to deal with a different vet unless they should become sick at some point. 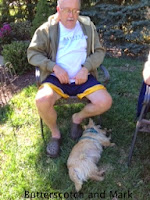 While we were there, we visited "Baxter," the Scottie owned by friends Mark and Dave. They wanted to see our new girls, so we visited one day. We were fearful that our girls wouldn't get along. . . they don't seem to like other dogs, but they got along great. We were able to let them run around the fenced in yard while we were there. Baxter was the perfect host and the girls got in a 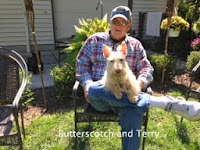 lot of loving with Dave and Mark. 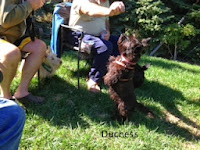 Now we are finally back in the rig over at the campground. I feel like I am at home. This is where I prefer and we are enjoying our time here. We will go to the apartments daily to work. . . we have some windows being put in and a tenant moving out, so we have to get that rented.

Tuesday we head down to Wabash to watch the Moody Blues. We have seen them twice before, but we really do enjoy their music. We are taking the girls with us down to my sister's where Mom says she will let them out while we are gone.

We will stay here till the end of the month, then we are headed south. I'm ready.

Sounds awesome! Selling the apartments? Big step but probably a good one. The money wouldnt hurt would it! Lol