Today we got out early (for us) and went to the flea market in Goodyear. What a bust! It is a huge place, but very few vendors were even set up. The were some things to look at and I did get a wallhanging of cactus and coyotes howling at the moon. It's pretty cool and it is to put in our building if we ever get it built in Texas. If not, I guess it is doomed to forever be stored under the bed in the motorhome. 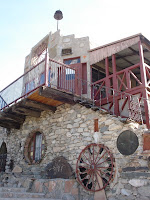 After leaving there, we drove to the Mystery Castle, which is really no mystery and no castle. It was built by a man who left his wife and daughter in Seattle, came 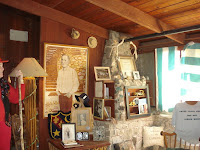 here and over time, scavenged articles and materials from the nearby (at that time) 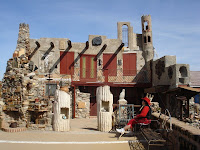 town dump with which to build the castle. He came here because he was diagnosed with tuberculosis and thought he would be cured from the air. The story is that he didn't 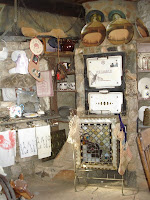 want to infect his wife and 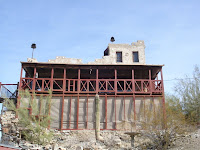 child, so he left without telling anyone where he was. He continued to live for another 16 years and eventually succumbed to cancer. Once his will was read, his wife and daughter were contacted and they came to Phoenix and moved into the "castle." The father had always promised his daughter he would build her a castle and as he continued to live, he kept adding rooms on until there were 18 rooms and 13 fireplaces. It is rough, rustic, etc. It is hard to described. He was extremely eccentric, but his daughter is probably more so, decorating the place with a sense of the macabre. There are skeletons all around and stuffed life-sized dolls, all permanent residents of the house. The doors and windows certainly do not fit tightly, many windows are broken and have been glued back together. It is just bizarre. When we entered the main part of the living quarters, the owner herself greeted us. 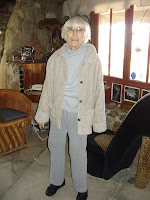 Mary Lou Gulley is the daughter for whom the house was built and she has lived here since 1946 with her mother, until her death in the 60's. She is a lovely person, albeit a bit strange to share her home with all the strange and wild furnishings. I read one description which said visiting the house was like stepping into someone else's dream. That is pretty close . . . or stepping into a Charles Dicken's novel.

From there we went up the mountain against which the house is built. Terry drove up to the 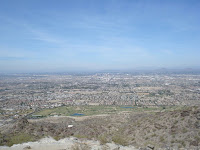 lookout at South Mountain Park, but I had to drive down. It was five miles, but slow going because of the hairpin turns.


We drove through Scottsdale on the way home and had a late lunch at a pizza place. I snapped a 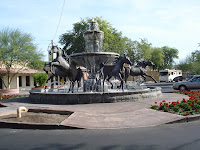 picture of a beautiful horse fountain. This was in an historic shopping district which had a lot of little shops and lots of Indian jewelry. I think the turquoise and other Indian jewelry is beautiful on the Indians, but I find it a bit too gaudy for my tastes. I just was never meant to wear that stuff, but I do admire the workmanship that goes into it.
Tomorrow we are off to the Mesa Marketplace. Terry does not remember going there a few years ago, but I do. That is extremely surprising that I remember something he doesn't. Afterwards, he has promised me lunch here http://www.tobykeithusa.com/. I can't wait!
Till next time. . .
Dale
Posted by Dale at 9:27 PM