All our alarms rang this morning and we were up at 4:30 a.m. We got up and got things stowed and checked in at the ferry dock early, at 5:45. It was then we learned that the ferry would be leaving an hour late. LOL No problems, just a tide issue and they had to wait on the tide.

So we got in line and talked a bit with some other travelers which always makes the time go fast. We actually got loaded earlier than we thought and it was interesting. This is a different ship than we have been on before and we are making multiples stops before we get to Ketchikan. We drove on and were put in a “hold” position and eventually backed up into the slot where they wanted us. Hmmmm. Whatever works. 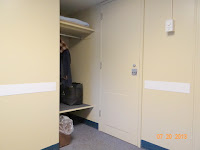 Once we got parked, we headed up the stairs and to the purser's office to get the keys to our cabin. Since we will be on the ship for 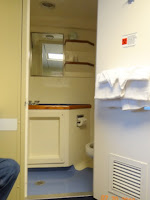 24 hours, we booked a cabin. It was surprisingly very comfortable. Bunk beds, but very large singles, :-) and a bathroom with a shower. Very nice. We stowed our gear that we didn't want to drag around with us and went up top to watch our departure. Fog had rolled in, but it doesn't seem to last long. We have had fog off and on all day. We weren't sitting for long before we both got tired, so we went back 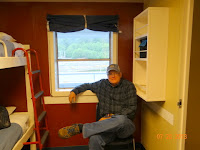 to our room and lay down. After about an hour, we starting moving again and heard the captain announce that killer whales were spotted on the starboard side. We looked out our window and a huge whale was 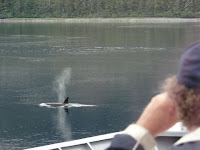 right next to us! Whoo hoo! He was doing that thing where they come up. . . breech? Not a dive, but it was pretty cool.

So, we have been busy today doing nothing. . . going from the observation deck to the lounge, to the “quiet” room. . . we read, we rest, we talk with other passengers, ate lunch. . . watch for animals. We saw some sea lions. As we were coming into port in Kake, we saw a humpback whale. . . he rolled a couple times, then dove and “gave us the tail.” It's been a very enjoyable trip and we have a ways to go yet. It's 4:30 p.m. and we get into Ketchikan at 7:30 a.m. tomorrow morning. 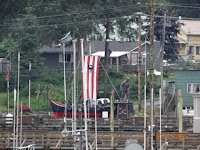 Our next stop after Kake was Petersburg, which is known as "Little 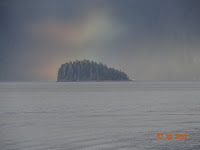 Norway" reflecting the heritage of the settlement. They have a replica of a Viking boat and I managed to get a quick shot of it as we sailed by.  We also were treated to a rainbow effect of the sun peaking through the fog and mist and landing on this island. Not sure what this would be called, but it was pretty.