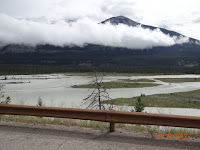 We are just clicking off the miles heading to Indiana. We plan to stop first in Sioux Narrows, Ontario, and see some friends. 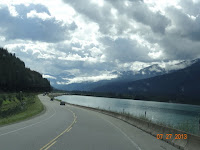 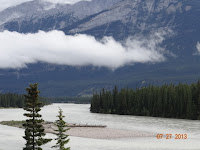 and we drove through it on the Trans-Canadian Highway. It was as beautiful as it was before. We were here when we first started our journey into Canada and on up into Alaska. We did see some wildlife today. We saw another fox, a coyote and a big bull elk grazing right alongside the road.

The road is four-lane for much of the way we are traveling. . .as least today it was. It is a little cooler where we are stopped today though. No matter. . . it is still pleasant. 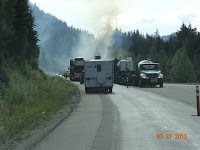 They have a unique way of repaving up here. They actually have a machine that tears up and 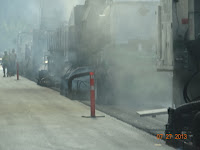 regrinds the blacktop, then remixes it and puts it back down. It's done all at the same time. It sure is a lot faster than the way we do it down in the states.

This afternoon we stopped at the Edmonton Mall. Terry has wanted to take me there ever since he visited it 20+ years ago. Not my cup of tea though. It was packed. . . it was hard to find a parking place for MinnieMee, but we did. The mall was wall to wall people on the inside, then they have an amusement park, a water park, and an ice skating rink, etc., and there were hundreds of people in all of those. Just too many people for my liking. I probably would not even shop there if I lived here. Perhaps it would be better on a weekday, but it was so big we had to use a map to get around. We did find "Bourbon Street" which were better restaurants that you find at the food court. We ended up in Sherlock Holmes Pub and I had a steak dinner and Terry had a pasta salad.

We drove on about an hour east of Edmonton to the town of Vegreville and are camped here in a city  RV park. Vegreville and the area around here is known for its Ukranian population and there is a giant Pysanka, which is a decorated egg. Some people 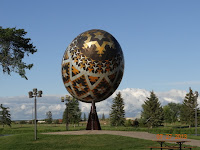 want to call them Easter eggs, but I don't really think they are. In Goshen, my hometown, there is a large Ukranian population and so I was familiar with these and other Ukranian traditions. They have a "re-created Ukranian village" down the road here, but it was closed when we went in.

There are train tracks next to the park and we are hoping there won't be any trains tonight. Ho Ho.

Only had 3 trains through the night. I guess I only heard the one that laid on the horn for 1/4 mile before and after the campground.