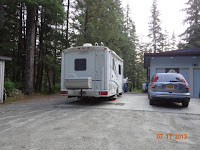 Today we took MinnieMee over to Bob and Val's because we planned to boondock there for the night. We wanted to explore the town, and we could hop a bus a block or so down from their house. 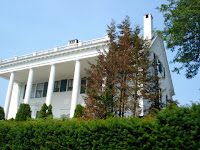 As it was, Val offered to take us downtown and drop us off, which was great. Before she dropped us off, though, she took us around the downtown area showing us everything of interest. Juneau is 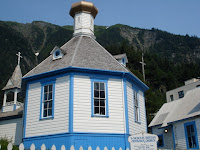 built between the water and the mountain and houses are built going up the mountain in the rock. The streets are very narrow and are 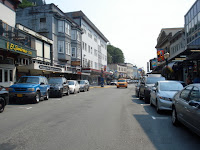 usually two-way! LOL It was a bit hair-raising! Some of the streets were extremely steep and combine that with the narrow width, it was quite an adventure. Fantastic views of town graced every turn 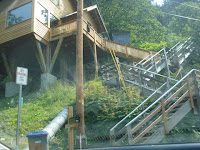 in the road. She took us by the Governor's Mansion, which was really beautiful, the Wickersham National Historic Site, the Russian Orthodox Church and into several residential areas which are restored homes previously owned by mine executives when the gold mine here was active. Regular tourists never see this part of Juneau and it was a real treat to have someone show it to us.

She took us up to the area where the gold mine was. I think they may still do tours of the area, but a lot of the hiking trails have been closed because of the dangers of 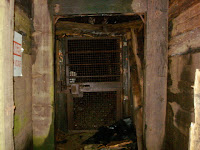 falling into holes resulting from the deterioration of the mine tunnels. Several shafts are visible, but sealed up and we went to one of those. 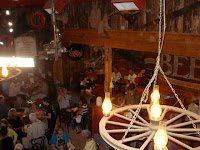 Val dropped us off at the Red Dog Saloon which is downtown. I had wanted to go there because the "logo" is a Scottie dog. I shopped till I dropped in there! Hah. We walked around the area for a while and then came back and ate a lite lunch at the Red Dog. Food was not spectacular, but it was good. 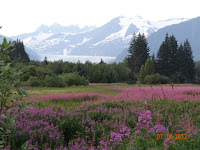 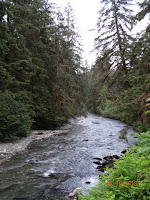 bit. Val fixed us hamburgers on the grill and salads, so we ate our fill and played with Maggie, their Keeshond. Afterwards we again got into Val's car for more sightseeing. She took us to the "other" side of the Mendenhall Glacier and got some good pix from a different angle. 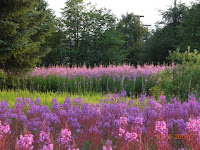 Eventually we made it back home and into bed in MinnieMee. We have an early start in the morning by checking into the ferry terminal at 6:30 a.m. so we wanted to get some sleep.