We arrived in Juneau Sunday night and went straight to bed. The next morning we got up and broke camp. We drove over to Bob and Val's house. Bob and Terry were in cancer treatment together in Houston 2 1/2 years ago and we wanted to visit with him since we were here. 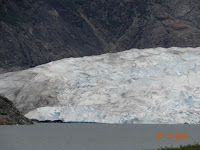 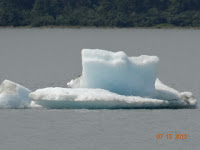 the street from the campground and they told us what not to miss on our day out in the city. We didn't plan to do the downtown the first day, but wanted to see some other 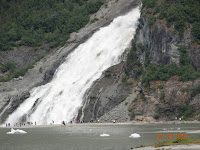 sites first. . . like the Mendenhall Glacier. We went there first. It was only about 1 1/2 miles from their house and we 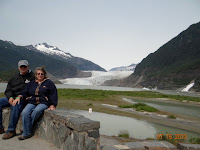 had ample parking for MinnieMee. The glacier is very large with a waterfall to the side. The lake, known as Mendenhall Lake, has icebergs in it and is extremely cold. Brrrrrr. We hiked out to a photo point for closer pictures, but we didn't hike to the falls. A bit too far. 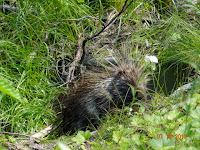 On the way back to the motorhome, we found a face staring at us from the ditch. A huge porcupine. Terry had been wanted to see one, but I didn't think we would get the chance. He was very pretty and I got one picture of his face before he hid in the culvert. After that, all I could see were his back and tail. LOL

We drove on toward town and stopped at the fish hatchery. We 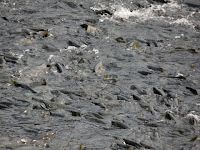 crossed Salmon Creek and could 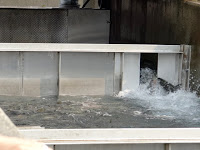 see the salmon running, so found the RV lot and parked. Walking up to the building, we passed by the fish wier, or ladder. Similar to Valdez, they collect thousands of fish into the fish ladder where they are routed up into holding tanks. Once the fish have 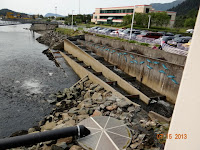 produced eggs, they herd them into a tank and zap them with electricity to stun them. They they harvest the eggs and fertilize them by squeezing the sperm from the male fish. Then the fish are sent overseas where it is determined if they are fit for "human use." But they primarily are used in the production of pet food. I didn't quite get this at all. I inquired where they got the salmon they sold in their gift store and they told me. . . "from out there" and motioned to the harbor. LOL I'm thinking. . . hmmmm. At Valdez, the fish are processed and sold in their retail outlet. I'm a little bit mystified by the procreating of "pet food fish." Why don't they fertilize and produce salmon fit to eat? Something tells me they do. Sounds like a coverup. LOL

We drove downtown Juneau in MinnieMee and decided (as we were told) there was no place to park, but we got a feel for the place just the same. We checked out the creek on the way back and watched salmon going up the creek. These were ones which managed to avoid the fish ladder. 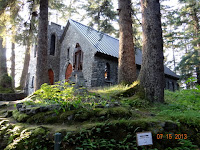 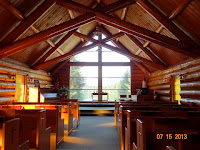 Later, Val and Bob came by and took us out sightseeing. Since it is light way late, it offers a good bit of time in the evening to see stuff. We went and visited the Chapel by the Lake and the Shrine of St. Therese. Both very impressive. We took pictures from several coves and Eagle Beach which has. . . EAGLES! There were both adults 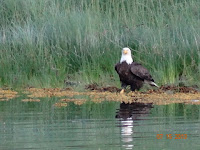 and juveniles. We continued to 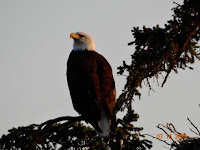 drive out till the road ends. Near the end we found a guy taking pictures. We stopped and he showed us an eagle nest. One of the adults was there and there were two babies in the nest. They were pretty good 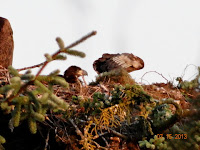 size and appeared to be plucking out their downy fluff as their feathers were coming in.

It was a great evening with great friends. We got back to the rig close to 11 p.m. but we had seen a lot!